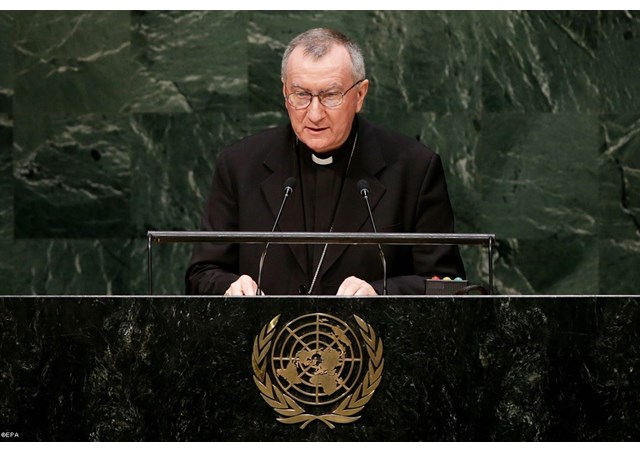 The event was sponsored by the Vatican’s Permanent Observer mission to the UN, together with Caritas Internationalis and the Geneva based International Catholic Migration Commission.

The one day meeting at the UN headquarters in New York marks the first time the General Assembly has called for a summit on this issue. Organisers hope it will point the way towards a more responsible and predictable system for responding to large movements of refugees and migrants.

Cardinal Parolin's full statement to the summit is below:

Statement on Roundtable #1: Addressing the Root Causes of Large Movements of Refugees and Migrants
By His Eminence Cardinal Pietro Parolin Secretary of State of His Holiness Pope Francis

During the preparatory phases of this Summit, much attention and effort have been dedicated to the search for durable solutions and more effective ways of sharing responsibility in the face of large movements of refugees and migrants.

The greatest challenge before us, however, is to identify and act on the root causes that force millions of people to leave their homes, their livelihoods, their families and their countries, risking their very lives and those of their loved ones in the search for safety, peace and better lives in foreign lands.

[In his report In safety and dignity: addressing large movements of refugees and migrants, the UN Secretary General maintained that causes of refugee movements include “conflict, violence, persecution, political repression and other serious human rights violations.”]

The primary cause of today’s refugee and migrant crisis is man-made: namely, wars and conflicts. Since human choices provoke conflicts and wars, it is well within our power and responsibility to address this root cause that drives millions to become refugees, forced migrants and internally displaced persons. The Holy See thus pleads for a common commitment on the part of individual governments and the international community to bring to an end all fighting, hatred and violence, and to pursue peace and reconciliation. The Holy See remains firmly convinced that, as Pope Francis has often stated, the way to resolve open questions must be that of diplomacy and dialogue.

Moreover, in the last few years religious persecution has become more and more a cause of displacement. Although other groups are heavily targeted, many reports confirm that Christians are by far the most persecuted faith group, speaking of “religious-ethnic cleansing”, which Pope Francis calls “a form of genocide”. Some of those persecuted, even in asylum countries, are facing harassment in refugee settings. We must not abandon them.

The preparatory document for this Roundtable rightly highlights that the availability and use of low technology weaponry has resulted in the spread of conflict, especially in countries and societies where the rule of law is fragile and poverty is widespread.

The Holy See has repeatedly called to limit strictly and to control the manufacture and sale of weapons, where the likelihood of their illegal use and their falling into the hands of non-state actors is real and present. The proliferation of any type of weapons aggravates situations of conflict and results in huge human and material costs, provoking large movements of refugees and migrants and profoundly undermining development and the search for lasting peace.

Addressing the root causes of displacement of peoples requires strength and political will. As Pope Francis has said, this “would mean rethinking entrenched habits and practices, beginning with issues involving the arms trade, the provision of raw materials and energy, investment, policies of financing and sustainable development, and even the grave scourge of corruption”.

Finally, the Holy See feels itself compelled to draw urgent attention to the plight of those migrants fleeing from situations of extreme poverty and environmental degradation. While these are not recognized by international conventions as refugees and thus do not enjoy any particular legal protection, nonetheless they suffer greatly and are most vulnerable to human trafficking and various forms of human slavery.

For this reason, in our efforts to address effectively the root causes of large movements of refugees and other forced migrants, we should also strive to eliminate the structural causes of poverty and hunger, attain more substantial results in protecting the environment, ensure dignified and productive labor for all, provide access to quality education, and give appropriate protection to the family, which is an essential element in human and social development.