Pope Francis at Mass: the logic of the day after tomorrow 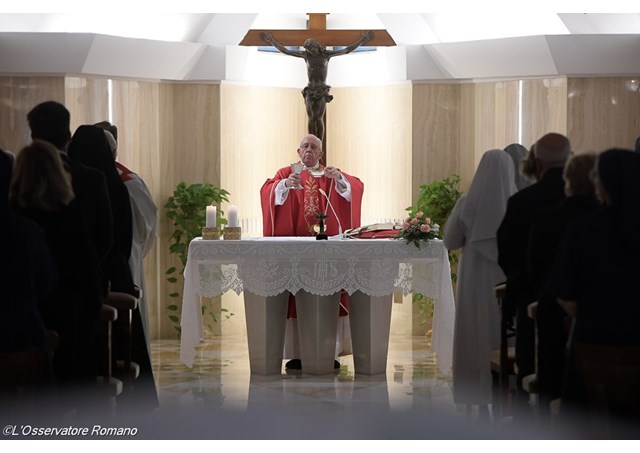 (Vatican Radio) Pope Francis said Mass in the chapel of the Casa Santa Marta on Friday. In remarks to the faithful following the readings of the day, the Holy Father reflected on the “logic” of Christian faith – the fundamental way of thinking that arises from real assent to the truth claims that Christianity advances – a logic he described as one of “the day after tomorrow” – a logic that looks forward to the resurrection of the body.

Beginning with a passage from the First Letter of Paul to the Corinthians (15:12-20), in which the Apostle to the Gentiles specifically addresses the certainty of Christian faith in bodily resurrection, rooted in our certainty that Christ is risen from the dead, the Holy Father reflects on the implications of, and the challenges to, our faith.

“It is easy for all of us,” he said, “to enter into the logic of the past, because it is concrete,” and it is also “easy to enter into the logic of the here-and-now, because we see it.” When, however, we look to the future, then we think it is “better not to think,” or at least, easy to fall prey to the temptation not to think it all the way through:

We wonder, he continued, how the sky will be, or whether “we will all be there,” but, “we do not reach what Paul wants us to understand – this logic of the day after tomorrow.” Here, he warned, “we betray a certain Gnosticism,” when we think that “everything will be spiritual” and “we are afraid of flesh.”

Say “No!” to spiritualistic piety, and enter into the logic of the flesh of Christ

Do not forget, he said, “this was the first heresy” that the apostle John condemns: “Who says that the Word of God does not come in the flesh is Antichrist”:

Francis recalled that the early Christians asked about how Jesus was resurrected and notes that it is in the faith in the resurrection of the body that the works of mercy have their deepest root cause. On the other hand, he continued, St. Paul strongly emphasizes that all shall be changed, our bodies and our flesh will be transformed.

Pope Francis went on to remind the faithful that the Lord “let Himself be seen, and touched, and he ate with the disciples after the resurrection.” This “is the logic of the day after tomorrow, one that we find difficult to understand,” in which we find it difficult to enter: