Pope in Assisi: ‘thirst for peace’ 30 years from 1st Day of Prayer 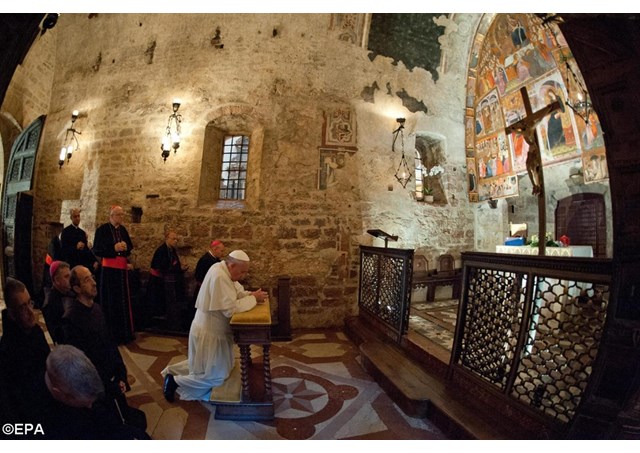 (Vatican Radio) Pope Francis will take part in the final meeting of the World Day of Prayer for Peace when he travels to Assisi on Tuesday, 20 September.

The World Day of Prayer for Peace concludes a 3-day event organized by the Sant’Egidio Community entitled this year “Thirst for Peace. Religions and Cultures in Dialogue”. It will see the participation of over 450 religious leaders of different faiths gathered to pray for peace and strengthen dialogue in the spirit of Assisi.

The first “World Day of Prayer for Peace of Assisi" was held by Pope Saint John Paul II in October 1986 the first time such an event had occurred. Major religious leaders, including the Dalai Lama and the Archbishop of Canterbury, joined with the Pope to call for peace, unity, and interreligious understanding.

Saint John Paul II closed that meeting with the call "Let's keep spreading the message of Peace and living the spirit of Assisi" and since then the community of Sant'Egidio has sought to fulfill that message by convening an annual meeting of religious leaders to discuss critical global issues of peace, unity, and interreligious dialogue.

Upon his arrival in Assisi, Pope Francis will be greeted by a group of faith leaders, including the Archbishop of Canterbury and the Ecumenical Patriarch Bartholomew. The day will include afternoon prayer in St Francis' basilica and the Vatican has announced that the religious leaders will also meet "victims of war".

The Pope will meet religious leaders and others individually including two Jewish and Muslim leaders and the event will conclude with a signing of an appeal for peace that will then be handed to children representing different parts of the globe.

As the Bishop of Assisi, Domenico Sorrentino explains to Vatican Radio’s Linda Bordoni, the event takes place in a historic moment for peace-building as we witness so many situations of war, terrorism and widespread violence:

Bishop Sorrentino says the meeting is a great occasion to bring people together: “believers in all the religions together in this moment in which the world is facing big crises every day”.

And quoting Pope Francis he says a third world war is being fought piecemeal and he says this meeting is an occasion for grace.

Bishop Sorrentino says that the city of Assisi bears a great responsibility as it is the city of Saint Francis, a city that is beloved across the world.

“We know that we must continue in his footsteps and in the footsteps of the Gospel” he says.

And he points out that it is the ‘way of Saint Francis’ to welcome all people, giving the testimony of Christianity which not only is solid in the faith but has the capacity to open its arms to everybody.

The Bishop says that Pope Francis’ obvious affection for the city of Assisi is a great joy for its inhabitants.

“Pope Francis who chose the name of Francis feels himself to be at home in Assisi” he says.

And Bishop Sorrentino recalls Saint Pope John II’s ‘prophetic’ intuition of 30 years ago and points out that just as Pope Benedict did, “Pope Francis comes to be in the footsteps of this prophecy”.