Pontifical Commission for the Protection of Minors holds plenary 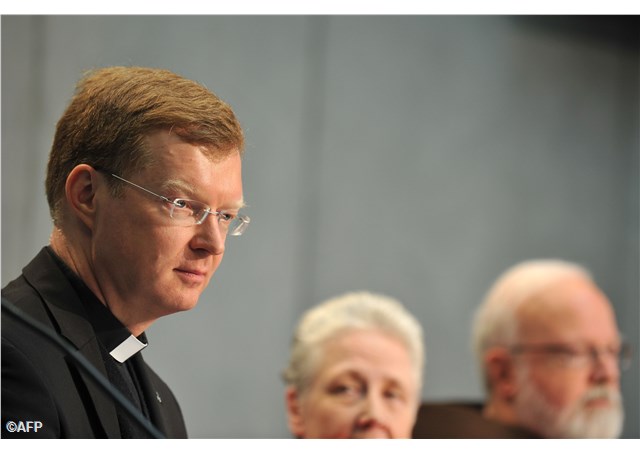 The Working Group meetings focused on the updates for current projects, and developing draft proposals for  Pope Francis.

Lydia O'Kane spoke to Commission member Gabriel Dy-Liacco from the Philippines about the Commissions work.

Please find below the full press statement from the Commission:

The Pontifical Commission for the Protection of Minors [PCPM] works throughout the year and came together in Rome from September 5 through 11 for a week of Working Group meetings, [Guidelines, Healing and Care, Education, Formation, Theology and Spirituality, Canonical and Civil Norms] and for its Plenary Assembly.

The Working Group meetings focused on the updates for current projects, and developing draft proposals for the Holy Father, Pope Francis.   For example, the Commission has developed a template for guidelines in the safeguarding and protection of children, adolescents and vulnerable adults, which we will shortly present to the Holy Father for his consideration.

Highlights of this Plenary Assembly were the members’ reports on the progress of on-going education programs, both at a local level and in the Vatican.

These initiatives are part of the Commission’s effort to be of service to the Holy Father by placing their expertise at the disposition of local churches and church leaders.  Commission members have also been invited to give talks and take part in various conferences and workshops on all five continents.

These include: talks and workshops held in Australia, in the Archdiocese of Melbourne; in South Africa (SACBC), an orientation program for New Missionaries; in the Philippines [CBCP], a workshop for the Archdiocese of Manila; in Colombia, a talk with clergy of the Archdiocese of Bogotá, a workshop with religious communities, workshops with the Major Seminary and a workshop with evangelization leaders; USA, a talk with “United States National Safe Environment and Victims Assistance Coordinators”; a workshop in Fiji; in New Zealand a series of talks and workshops with the bishops and religious leaders; in Ghana a meeting with the secretary generals of the Symposium of Episcopal Conferences of Africa and Madagascar from the Association of [SECAM]; a meeting in Tanzania with child protection practitioners from the Association of Member Episcopal Conferences in Eastern Africa [AMECEA]  in Argentina, a discussion with seminarians and clergy of the Diocese of Moron, Buenos Aires; In Santo Domingo, a meeting with fifty formators from thirteen different nations belonging to the Council of Latin American Bishops Conferences  [CELAM]; a meeting with Bishops and canonists of Slovakia and Czech Republic;  in Italy, a seminar for Abbots of the Benedictine Confederation and participation in the Anglophone Safeguarding Conference.

In the context of the Vatican, Commission members were invited to address meetings of the Pontifical Ecclesiastic Academy and the Congregation for Consecrated Life.

Other education programs planned in the coming months include workshops in Mexico, Ecuador and with the Colombian Bishops Conference.  The Commission has also been asked to address the Conference of Major Superiors of Men in the US and to hold a workshop for the Federation of Asian Bishops Conferences [FABC].

A survivor of clerical child sexual abuse made the proposal of a Day of Prayer to the Commission. The Commission believes that prayer is one part of the healing process for survivors and the community of believers. Public prayer is also an important way of consciousness raising in the Church.

The Holy Father has requested that National Bishops Conferences choose an appropriate day on which to pray for the survivors and victims of sexual abuse as part of a Universal Day of Prayer initiative.

The Commission was happy to learn that many Bishops Conferences have already taken steps to enact the proposal.

We were informed that in Australia, the Church throughout the country marked the Day of Prayer on Sunday September 11, in conjunction with their National Day for Child Protection.

The Bishops of the Philippines have already begun to discuss how best to implement the Day of Prayer and will soon announce a date.

The Southern African Bishops Conferences [SACBC] have embraced the proposal dedicating three days to the initiative from Friday December 2 to Sunday December 4., the second Sunday of Advent.  Friday will be observed as a day of fasting, there will be a penitential vigil on Saturday and on Sunday a statement prepared by the SACBC, will be read out in all parishes.

The PCPM has prepared resources and materials for the Universal Day of Prayer and we are happy to make them available on request.

MOTU PROPRIO “As a Loving Mother”

Our presence in the digital world is seen as key to furthering the Commission’s efforts to collaborate with local Churches and disseminate the importance of the protection and safeguarding of minors and vulnerable adults.  In the coming months the Pontifical Commission for the Protection of Minors will be going live with its own website.  It is also our hope that it will be a useful resource for the Church and all people of good will in our common goal, which is to make our Church and our society a safe home for all.

The Pontifical Commission for the Protection of Minors was created by Pope Francis in March of 2014. The Chirograph of His Holiness Pope Francis states specifically, “The Commission’s specific task is to propose to me the most opportune initiatives for protecting minors and vulnerable adults, in order that we may do everything possible to ensure that crimes such as those which have occurred are no longer repeated in the Church. The Commission is to promote local responsibility in the particular Churches, uniting their efforts to those of the Congregation for the Doctrine of the Faith, for the protection of all children and vulnerable adults.”