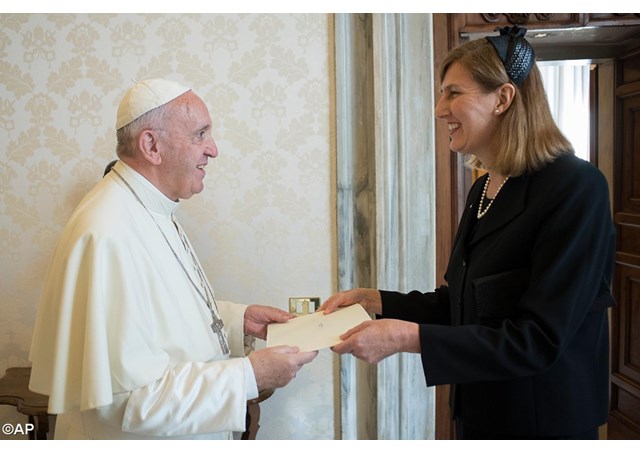 (Vatican Radio) Pope Francis met on Thursday with the new Australian ambassador to the Holy See, Melissa Hitchman, who presented her credentials.

The newest member of the Vatican’s diplomatic corps is an experienced career officer with Australia’s department of foreign affairs and trade.  She has previously served overseas as first secretary at the Australian High Commission in London.

Diplomatic relations between Canberra and the Holy See were formally established in 1973 but Hitchman is both the first career diplomat and the first woman to hold the post of resident ambassador.

She sat down with Philippa Hitchen to talk about her goals and to share her perspectives on refugees, aboriginal rights, counter-terrorism and on the role of women in society ….

Ambassador Hitchman says she’s building on the strong foundations of her predecessors but notes she’s the “first career diplomat and first woman to hold this position as resident ambassador”, something she describes as “a deliberate appointment” by her government and an opportunity continue the task of putting “Australia on the map”

She outlines four goals on her agenda, beginning with building up the partnerships between “a reformist pope in Francis” and “an innovative Australian government under [Prime Minister] Malcom Turnbull and foreign minister Julie Bishop and the rest of the cabinet”…

Secondly, the ambassador says she wants to elevate “in the public consciousness” the broad agenda that Australia and the Holy See already share on conflict resolution, on human trafficking, on peace building, and on gender empowerment. She notes her country’s bid as a candidate for the U.N. Human Rights Council in 2018 to 2020, saying “there’s a convergence of views there” too.

Alongside the “government-to-government links”, Melissa Hitchman highlights the “very strong and robust people-to-people set of links” that exist through the network of Australian religious men and women serving in the Curia or studying here in Rome, as well as the large number of students attending Australian Catholic University. Her third and fourth goals, she says, are to “tap into” those two links with religious and lay people in Rome in order “to make the relationship vibrant and current”.

Asked about the level of interest in the Holy See within Australia today, the ambassador says both sides “might be surprised at how much interest there actually is”. She describes Pope Francis as “probably the most recognized global leader”, respected for his views and held in affection by Catholics and non-Catholics alike. She says her country has just held a recent census and the results have yet to be made public, but the last survey in 2011 showed that over a quarter of the population (25.1%) identified as Catholic. She also reveals that her government has had “the largest expansion of its diplomatic footprint in 25 years” stressing that those in government and in wider society “see the value of this post and want to continue with it”.

Speaking about Australia as a pluralist, multi-cultural society, Ambassador Hitchman recalls the terrorist bombings of 2002 and 2005, which she says “still resonates in the Australian consciousness”. She says her government has “a very robust policy on counterterrorism efforts”, with Foreign Minister Julie Bishop currently on a tour of Germany and the UK to talk about partnerships in areas including countering violent extremism. She believes the Church also has a role to play in building interfaith and intercultural harmony: while it’s “not for us to dictate what that role would be”, she says Pope Francis’ comments on inclusiveness and respect for different views, ethnicities and faiths is one that resonates in Australia.

Asked about criticisms of her country’s treatment of refugees and migrants, the new ambassador says there “seems to be a misconception that Australia doesn’t have borders that welcome refugees”. She notes that her country takes in “the globe’s highest per capita resettlement of UNHCR recongised refugees”. Australia currently accepts 13.000 refugees a year, but she says “we agree more needs to be done and that’s why [….] we’ve also agreed to take in 12.000 from the Syrian-Iraq conflict and our government has committed to increasing the refugee humanitarian intake up to 18.000 in 2018-2019”. Hitchman says the refugees accepted into Australia are “amongst the most disadvantaged and have waited the longest for resettlement”. She also notes her country is a member of the Bali process on people smuggling and human trafficking, adding that Australia’s ambassador on this issue was in Rome for a conference last June but “there was a sense our region was under-represented [..] and we look to improving that dialogue and expanding on it”.

Talking about the role of women in Australian society, the new ambassador says her country has “a very strong policy on gender empowerment and looks to partner with others such as the Holy See” on this issue. She mentions Australian lay woman Rosemary Goldie who was for many years the most senior woman in the Roman Curia as undersecretary of the Council for the laity and an auditor during the Second Vatican Council. The ambassador stresses that her government’s policy on gender empowerment, particularly in the  Indo-Pacific “recognizes that where women are involved, it can lift outcomes right across board, not only for them, but for their economies, and we look at doing that in health, in education, in employment [and] politically. She cites a new gender action strategy recently launched by a portfolio minister “which is available on our website”.

Discussing the challenges of improving living standards for indigenous Australians, Hitchman says that her country “has had a struggle with its history and it’s one we’ve been very transparent and open about it”. She speaks of progress made through the 2008 apology to ‘the stolen generations’, under former Prime Minister Kevin Rudd, as well as the ‘Closing the Gap’ report on health, education, employment and other issues for indigenous people. She says the Prime Minister has committed to reporting to Parliament every year and is also looking at recognition of indigenous people in the constitution which, she says, will be an important step forward.

Finally, the new ambassador talks about the Vatican cricket team, founded under her predecessor John McCarthy, saying that “we all bring different strengths to the position [and] I wouldn't say sport or cricket was one of mine!" However, she notes that her government has a sports diplomacy agenda and Australia will be represented at the Faith and Sport conference coming up in the Vatican in October “ so there’ll be a continuation of sorts in that sphere, but not in exactly the same direction”.