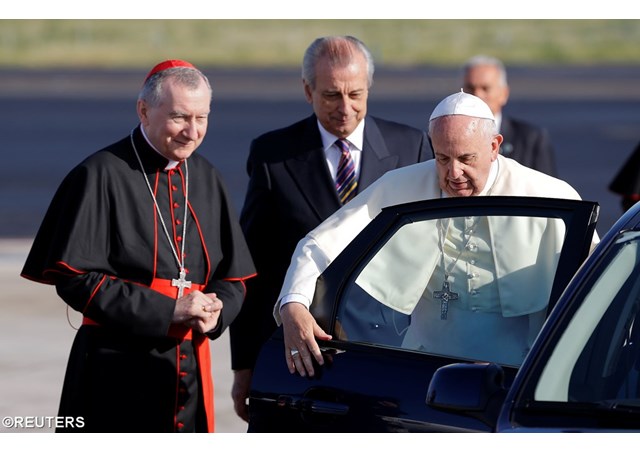 (Vatican Radio)  Cardinal Pietro Parolin, Vatican Secretary of State, expressed his ‘hopes and expectations for new developments and a new season in relations between the Apostolic See and China’ in a speech on Saturday at the diocesan seminary in Pordenone, Italy.

The speech – laden with the history of diplomatic relations between China and the Holy See – focused on the figure of Cardinal Celso Costantini as a bridge builder.

Born in Castions di Zoppola in 1876 and an honorary citizen of Pordenone and Aquileia, Cardinal Costantini was named the first Apostolic Delegate to China in 1922 until 1933 by Pope Pius XI.

Cardinal Parolin said “Celso Costantini successfully completed a mission of extraordinary importance: he created a ‘bridge’ between Holy See and China, to which Pope Francis pays the utmost attention and, I am sure, also the people and government of China”.

A diary written by Cardinal Celso Costantini, entitled The Secrets of a Vatican Cardinal: Celso Costantini's Wartime Diaries, 1938-1947, was kept secret before being published in 2010 and tells some of the story of his assignment in China.

Below is a Vatican Radio English translation of the conclusion portion of Cardinal Parolin’s speech:

In light of these brief reflections on the events surrounding Cardinal Celso Costantini in relation to the vast ‘continent’ that is China, one becomes aware of his singular capacity to ‘build bridges’, that is, his capacities of knowledge, of respect, of encounter, and of dialogue between worlds, very distant, at least in appearance.

Today, as ever, many are the hopes and expectations for new developments and a new season of relations between the Apostolic See and China for the benefit not only of Catholics in the land of Confucius but for the entire country, which boasts of one of the greatest civilizations on Earth. I would dare to say [these relations] would be beneficial even for an ordered, peaceful, and fruitful cohabitation of peoples and nations in a world, like our own, torn by many tensions and conflicts. I consider it important to forcefully underline this idea:  New hopes and good relations with China – including diplomatic ties, if God so wishes! – are neither an end in themselves nor a desire to reach some kind of ‘worldly’ success. They are thought out and pursued – not without fear and trembling because it involves the Church which belongs to God – I repeat, they are pursued only in the measure in which they are ‘ordered’ toward the good of Chinese Catholics, to the good of the entire Chinese people, and to the harmony of the whole society, in favor of world peace.

Pope Francis, as his predecessors John Paul II and Benedict XIV before him, knows well the baggage of suffering, of misunderstandings, often of silent martyrdom which the Catholic community in China carries on its shoulders: it is the weight of history! But he also knows, along with external and internal difficulties, how alive is the yearning for full communion with the Successor of Peter, how many advances have been made, how many efforts are made to witness to the love of God and the love of neighbor, especially to the people weakest and most in need, which is the synthesis of all Christianity. [Pope Francis] also knows and encourages, especially in this Jubilee of Mercy, mutual forgiveness, reconciliation between brothers and sisters who have been divided, and the struggle to grow in understanding, collaboration, and love!

We are all called to accompany with caring closeness, respect, humility, and above all prayer this path of the Church in China. It involves writing a new page of history, looking ahead with trust in Divine Providence and healthy realism to insure a future in which Chinese Catholics can feel profoundly Catholic – ever more visibly anchored on the solid rock, which, by the will of Jesus, is Peter – and fully Chinese, without having to deny or diminish all that is true, noble, pure, lovable, honorable (cf. Phil 4,8) of that which their history and their culture has produced and continues to produce. The Second Vatican Council reminds us that nothing is truly human if it does not find an echo in the heart of the disciples of Christ! (cf. GS n.1).

It should be realistically accepted that there is no shortage of problems to be resolved between the Holy See and China and that they can generate, often by their complexity, differing positions and orientations. However, such problems are not completely unlike those positively dealt with 70 years ago. Cardinal Celso Costantini, therefore, remains a source of inspiration and a model of extreme actuality. In this sense, I thank you also because this conference, prepared for you, gave me the occasion to better study the figure and work [of Cardinal Costantini], just as others in this diocese have done and are doing.

On the path which remains to be walked, we commend ourselves with immense trust to Our Lady, invoked under the title “Help of Christians, Auxilium christianorum”. Cardinal Costantini in 1924 crowned her image in Sheshan, near Shanghai.

On 22 May 2016, in light of the liturgical feast of Our Lady venerated in Sheshan, Pope Francis yearned for, in the current Year of Mercy, “an authentic culture of encounter and harmony of all of society, that harmony which the Chinese spirit loves so much” [1]. This spirit finds full consonance in the Bishops of Rome who have always demonstrated maximum consideration, enormous commitment, and unbounded love for the Chinese people.