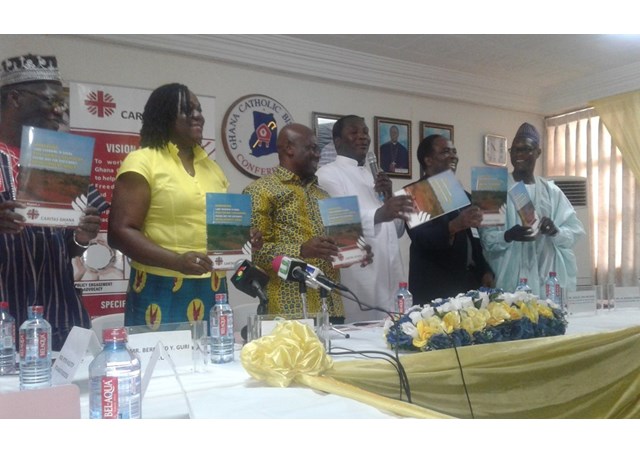 The 48-page document, presented at the opening of a two-day stakeholders forum on land grabbing in Accra on Tuesday 23 August contains findings from a research the Catholic church undertook on land issues in Ghana.

Damian Avevor, the News Editor of The Catholic Standard Newspaper in Ghana sent us this report:

Caritas Ghana, the charity wing of the Ghana Catholic Bishops’ Conference, has launched a Report titled “Unmasking   Land Grabbing in Ghana; Restoring Livelihoods; paving the way for Sustainable Development Goals” at the National Catholic Secretariat in Accra to kick start dialoguing on the issue  with the view to finding both policy and programme solution.

The Survey Report which covered about six months of research was prepared by Caritas Ghana in collaboration with the Centre for Indigenous Knowledge on Development (CIKOD) and the Africa Faith and Justice Network (AF&JN) with financial support from local and international partners.

The Survey, which also aims at raising the vexing issue of land grab as a national canker, was carried out as a follow-up to some of the recommendations that were adopted at a Continental Conference on Land Grabbing in Nairobi, Kenya last November and an initial case Study carried out in the Volta Region of Ghana, by AF&JN based in Washington DC, USA.

Speaking at the launch on Tuesday, August 23, Mr. Samuel Zan Akologo, Executive Secretary Caritas Ghana, said, the Ghana Catholic Bishops’ Conference has the keen interest and commitment to addressing the issue of land grabbing and Land Grabbers with the aim of protecting and restoring the livelihoods of rural people, protecting the environment and to save communities from unnecessary strife and conflicts as a result of land grabbing.

“It is our hope that this conversation that we are beginning today would help deepen our understanding on the issues involved to enable the Bishops take actions based on informed position.”

Mr. Akologo noted that Caritas Ghana, together with its partners, would also continue to engage in public awareness on the issue, noting that “We have the outreach potential to reach every nook and cranny of this country to ensure that no one is left behind.”

This is the aspiration for the implementation of the new Sustainable Development Goals which the Church is very much committed to promoting, he added.

Giving an overview of the Report, Executive Secretary of Caritas Ghana, said the opening Chapter reveals how inadequate land management and utilization policy coupled with previous economic development programmes, largely influenced by external forces, has created an environment for land grabbing in Ghana.

Another more recent catalyst to this evil has been urbanization, he added saying that “The chapter has noted that limited consultation with farmers, communities and households whose livelihoods depend on land, in very important decisions is a serious aberration with consequences for the violation of fundamental human rights.”

According to him, Chapter two uses Pope Francis’ Encyclical – Laudato Si on the Care of Our Common Home and his other teachings to emphasize the need for dialogue on how we are shaping the future of our planet. ‘What kind of world do we want to leave to those who come after us, to children who are now growing up?’ (LS160).

Mr. Akologo said that “The chapter suggests that the Church has critical role to play by first taking a hard look at itself to see where it may likely be part of the problem.

Second, by taking inspiration from Pope Francis to do advocacy on the care of the earth, noting that a collaborative approach between Church and State was being proposed to address the problem.

In Chapter Three, the Research report presents three case studies which demonstrates how land grab is a real threat to lives and livelihoods of especially those already at the margins of society and whose only coping mechanism is through their God-given resource of land.

The narrations of the cases of Okumaning, Babator and Brewaniase, based on information gathered from field interviews, are chilling and sometimes heart-breaking from the level of atrocities and flagrant disregard to people’s well-being. At first hand, based on promises and plans often outlined, they are paved with good intentions but actual results are disappointing to the people.

Some of the research questions for this survey and the definitions of land grab cases are recommended for use when sensitising communities and for further investigations on the subject matter.

Chapter four helps us to understand the dynamics of land grabbing which are tactfully driven and controlled by the foreign investors with their ability to exploit loopholes in national legal frameworks and the ignorance of communities. The potential for corruption, manipulation, threats and intimidation that pave the way for land deals done in surreptitious circumstances, have been explained in this chapter.

The chapter provides lessons for the Church in its attempt to tackle this menace in Ghana; from the adage ‘Forewarned is forearmed’, stating that “The experience of the Centre for Indigenous Knowledge and Organizational Development (CIKOD) in applying the Community Bio cultural Protocol (BCP) in a small community in the Upper West Region had helped the people to ward-off the ills of land grab for mining exploration.”

The adoption of the Sustainable Development Goals (SDGs) as the global new framework for development has thought us profound lessons about how development ought to be done and the need for a change in mind-set.

He noted that “Our proposals for policy consideration and recommendations, in Chapter Five, begin on the premise of Pope Francis’ Encyclical – Laudato Si on the Care for our Common Home.

Observing, Mr. Akologo said land grab can have dire and negative implications to the attainment of some critical sustainable development goals in Ghana.

This last Chapter recognizes that there already exist some policy guidelines and on-going advocacy efforts of other civil society organizations on land grab and or its related issues.

“We see Laudato Si as a framework for collective and collaborative response of Church, State, society and corporate bodies to build consensus in addressing the problem,” he added.

Rev. Fr. Wisdom Larweh, Assistant Secretary General of the National Catholic Secretariat, said the efforts of the Church in Ghana had resonated with Pope Francis’ proposals in Chapter five of Laudato Si, which addresses the question of what we can and must do to save mother earth.

He said the Pope says inter alia “this should include analyses of the current situation, concrete proposals for dialogue and action and consensus building. He states that the Church does not presume to settle scientific questions or to replace politics but wishes to encourage an honest and open debate and dialogue so that there will be a united effort at saving the earth which is our common good.”

Meanwhile, a two-day National Stakeholders’ Forum on Land Grabbing has taken place in Accra from August 23- 24, 2016 as part of the launching of the Survey Report.

About sixty stakeholders from Government, Community Actors, Justice and Peace Commissions, Leaders of Faith Base Organisations and media professionals are attending the Forum. The Executive Director of AF&JN, Rev. Fr. Aneidi Okure, OP and some officials of the Justice, Peace and Development Commission of the Symposium of Episcopal Conferences of Africa and Madagascar (SECAM) addressed the Forum.

The Forum, being organised by Caritas Ghana under the auspices of the Ghana Catholic Bishops’ Conference, gave the participants to share information and possible best practices of partnership in community land utilisation from win-win arrangements and other necessary steps needed to mitigate the situation in Ghana.

Land grabbing is generally perceived as large scale land acquisition by either internal or external actors purposely for business interest and displaces their original local owners. Emerging evidence shows that the phenomenon is growing in the Africa continent and is becoming a cancer that undermines sustainable development and impoverishes local people.

It has also been identified to be one of the major causes of forced evictions, displacements and dangerous migration of people; especially young people who see no hope for their future.