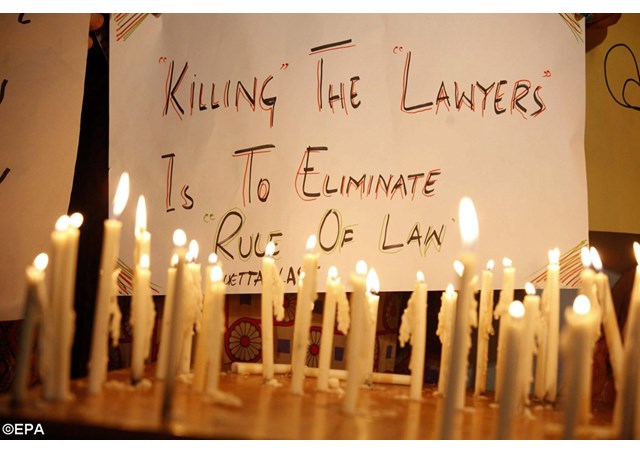 (Vatican Radio) Pope Francis has sent his condolences after the attack on the hospital in Quetta, Pakistan, which killed over 70 people.

The majority of the victims were lawyers who had gathered to mourn the assassination of the president of the Baluchistan Bar Association, Bilal Anwar Kasi, who was killed earlier in the day.

The telegram sent by the Vatican Secretary of State, Cardinal Pietro Parolin reads:

Deeply saddened to learn of the loss of life following the attack on a hospital in Quetta, His Holiness Pope Francis sends heartfelt condolences to the relatives of the deceased, to the authorities and to the entire nation, as he offers the assurance of his prayers for the many injured victims of this senseless and brutal act of violence.  Upon all who mourn and upon all who have been affected by this tragedy, His Holiness invokes the divine gifts of consolation and strength.

Earlier the Catholic Bishop of Faisalabad, Arshad Joseph who’s also the President of the Church’s National Commission for Justice and Peace, condemned the bombing calling it “an inhuman gesture that cannot be tolerated.”  Bishop Joseph urged the government to take action, saying “it has a duty to improve security measures” in order to guarantee the right to life of its citizens. The Bishop noted that the province of Balochistan where the attack occurred has suffered more than 14 hundred violent incidents during the past 15 years.

Pakistani lawyers were taking part in rallies across the nation on Tuesday and are also boycotting court proceedings to protest the violence.