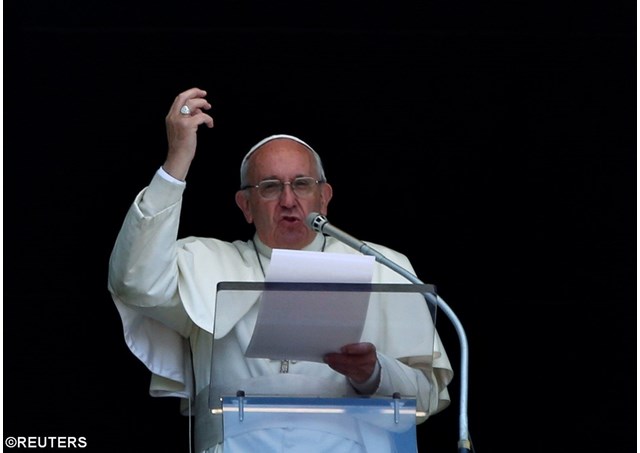 (Vatican Radio) Pope Francis renewed his condemnation of violence and his call for peace in Syria on Sunday. The Holy Father’s appeals came following the Angelus prayer with the faithful gathered beneath the window of the Papal apartments in the Apostolic Palace.

“Dear brothers and sisters,” said Pope Francis, “sadly, news continues to reach us from Syria, of civilian victims of the war there, in particular from the city of Aleppo.” The Holy Father went on to say, “It is unacceptable that so many defenseless persons – among them many small children – must pay the price for conflict - for the closure of the hearts and the want of a will for peace among the powerful.”

The Pope renewed his promise of spiritual closeness to all those suffering in Syria, along with his call for prayerful and effective concrete action to aid the sorely tried people of that war-torn land. “Let us draw near to our Syrian brothers and sisters with prayer and solidarity,” he said, “and let us entrust them to the maternal protection of the Virgin Mary,” before inviting the gathered faithful to a moment of silent prayer followed by a Hail Mary.

Rebels have been trying to break through a thin strip of government-controlled territory to reconnect insurgent areas in western Syria with their encircled sector of eastern Aleppo, in effect breaking a government siege begun last month.

Fighting has been extremely intense since Friday, when rebels began a major push.

There have been reports throughout the weekend of civilian casualties and non-combatant facilities being hit by artillery and possibly even targeted. Those reports include one of an air strike near a hospital in northwestern Syria on Saturday that killed 10 people including children, and caused damage to the hospital facility.

At least one medical charity has reported the month of July as the worst to date for attacks on medical care centres in Syria, with 43 attacks on healthcare facilities recorded in their count.