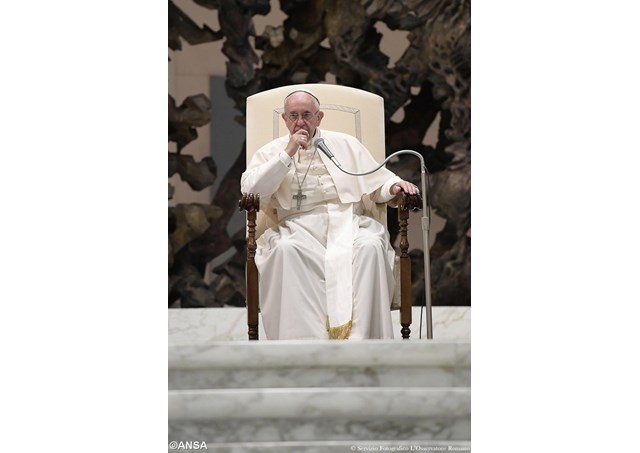 (Vatican Radio) Pope Francis met with participants in the Dominican General Chapter on Thursday ahead of his afternoon visit to Assisi, speaking to them about the need to incarnate the Gospel through preaching, witness, and charity.

The audience with Pope Francis concludes the General Chapter marking 800 years since the founding of the Order of Preachers by St. Dominic.

Beginning with a joke about his day’s activities, Pope Francis laughingly said his day could be called “A Jesuit among Friars”, since it saw him meet with the spiritual children of the contemporaries St. Dominic and St. Francis.

Putting jokes aside, the Holy Father got to the heart of the matter, speaking to the Dominicans gathered about the need to incarnate the Gospel through preaching, witness, and charity.

He said it was God who inspired St. Dominic to found the Order of Preachers and put preaching at the heart of their mission, just as Jesus had taught his disciples.

“It is the Word of God which burns from within and incites us to go out and proclaim Jesus Christ to all peoples. The Founding Father said, ‘First contemplate, and then teach’. Evangelized by God to evangelize. Without a deep personal union with Him, preaching may be very perfect, very rational, even admirable, but it will never touch the heart, which is what must change.”

The Word of God also requires witness, he said.

“Teachers faithful to the truth and worthy witnesses of the Gospel. The witness incarnates what is taught, makes it tangible, makes it call, and leaves no one indifferent. [The witness] adds to the truth the joy of the Gospel, aware of being loved by God and the object of His infinite mercy.”

Lastly, charity is necessary for the preacher and witness.

Referring to the early life of St. Dominic, the Pope said it was the living, suffering body of Christ which was inscribed in his entire existence.

“It is the body of Christ, alive and suffering, which cries out to the preacher and does not leave him tranquil. The cry of the poor and discarded awakens and makes us understand the compassion which Jesus had for the people. […] It is in the encounter with the living body of Christ that we are evangelizers, that we recover the passion to be preachers and witnesses of His love, and that we free ourselves from the dangerous temptation, extremely actual today, of Gnosticism.”