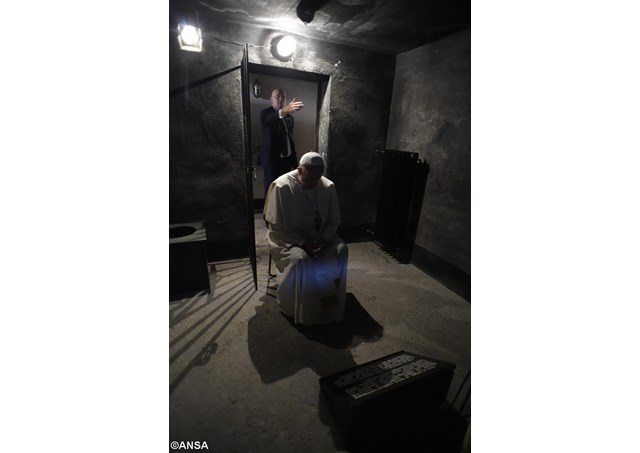 (Vatican Radio) Pope Francis on Friday morning paid an emotional visit to the Auschwitz-Birkenau memorial and museum, the site of a Nazi concentration and extermination camp where more than 1.1 million people, mostly Jews, were put to death during the Second World War.

Prior to his visit to the camp, the Pope decided he would not give a speech, saying he preferred to enter alone, in silent prayer. “I would like to go to that place of horror without speeches, without crowds -- only the few people necessary,” he explained. “Alone, enter, pray. And may the Lord give me the grace to cry.”

Lydia O’Kane is in Poland with Pope Francis, and sends this report:

For the Pope, this visit to the former Nazi concentration camp at Auschwitz-Birkenau was to be one of silence and prayer.

The only sounds to the heard were the shutters of the ever present cameras as a solemn Pope Francis walked alone through the infamous gate that reads “Arbeit macht frei” – “work sets you free”.

The Pope was then driven in an electric car to the notorious block 11, also known as the death block where Franciscan priest, Fr Maximillian Kolbe was killed after offering up his life for a complete stranger 75 years ago. You could hear a pin drop as the Pope sat in prayer with his eyes firmly closed in this place of suffering.

In one of the most poignant moments of this visit to Auschwitz I, the Pope met with survivors of this camp of terror, now elderly men and women who are the living witnesses to the horrors that took place here.

He greeted each one with a kiss on both cheeks and clasped their hands. Then holding a candle the Pope lit a lamp he had donated.

Following a prayerful visit to Maximillian Kolbe’s cell, Pope Francis made the 10 minute journey to Auschwitz II Birkenau, which was built in 1941 and saw the extermination of Jews on a massive scale. He saw for himself the train tracks and carriages that brought hundreds of thousands of people to their deaths and the now burnt out gas chambers that extinguished so many lives.

Then with a rabbi chanting Psalm 130 in Hebrew, this visit of reflection and prayer drew to a close with Pope Francis laying a votive lamp at the foot of the monument commemorating those people who never came home.