Pope Francis: "Gossip is the terrorism of words" 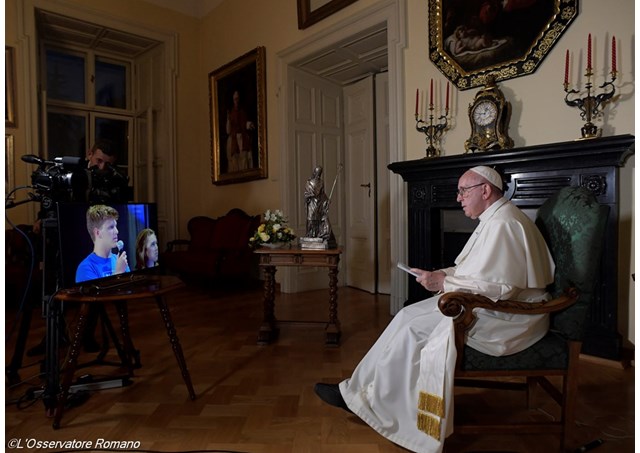 (Vatican Radio) As Pope Francis continues his papal visit to Poland, he answered the questions of three young people on Wednesday evening, who are participating in World Youth Day.

The first girl recounted how by chance she had not been on the train which was involved in the horrific crash earlier this month. She asked Pope Francis how she can return to normality and overcome the fear she now feels.

Pope Francis said that this was not a physical wound but a wound of the soul; fear.  He explained that life is full of scars and pain, but the young can learn to become wise. He expressed the importance of learning to live with both the beautiful and the ugly both with courage and with pain. Live with joy as it carries you forward and saves you from living in fear.

The second girl explained how she had arrived in Italy six years ago with a very basic understanding of Italian. She became a victim of bullying which pushed her to the point of trying to commit suicide. Although she has chosen to forgive, she explained to Pope Francis that she still feels animosity towards those who hurt her. She asked how can she forgive those completely and move forward as she does not want to hate.

Pope Francis first of all thanked her for telling her story. He gave her an expression that describes the cruelty of language; gossip is terrorism, it’s the terrorism of words, insulting one’s heart, dignity and in this young person’s case, nationality. We must choose silence, patience and most importantly forgiveness, however these choices are not easy. We must ask the Lord for help in choosing to forgive and forget fully, and ask Him to forgive those who hurt us.

The final question came from a boy who had been in Nice during the attack on Bastille Day.  He asked Pope Francis how, as young people, can we continue to spread peace in a world that is full of hate?

Pope Francis answered that peace builds bridges and hate builds walls and in life we have the choice to either build bridges or construct walls. Walls divide us, causing hate to increase, whilst bridges unite us allowing us to communicate with one another. We have the ability to build a human bridge, every time we hold someone’s hand. Even when bridges collapse, we must persevere and look for ways to rebuild them.