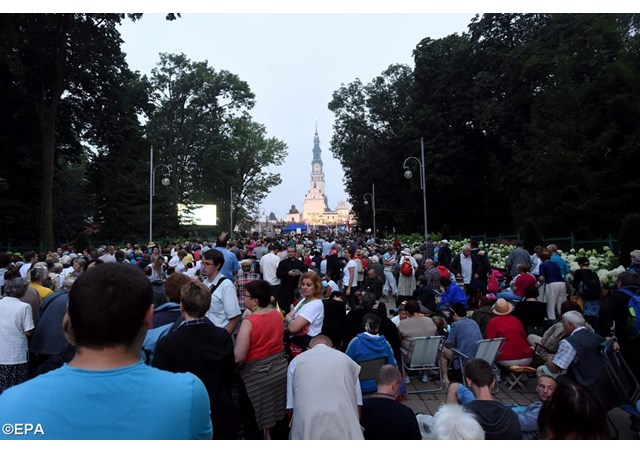 (Vatican Radio) Pope Francis was scheduled on Thursday to visit Jasna Góra Monastery in Częstochowa, Poland, to celebrate a Mass commemorating the 1050th anniversary of the Baptism of Poland. Vatican Radio’s Lydia O’Kane is in Poland, and sent us this report:

About an hour and a half outside Krakow is the monastery of Jasna Gora the most famous Marian shrine in Poland. Thousands of pilgrims come here every year to venerate the Black Madonna of Czestochowa which was reputedly painted by St. Luke the Evangelist. Many miracles have been attributed to this revered icon which has been visited in more recent times by both Popes John Paul II and Benedict XVI.

This large monastery in the baroque style overlooks the city of Częstochowa and is home to the Pauline Friars who have been here since 1382. It even boosts its own radio station. During this World Youth Day celebration thousands of young people have being making a pilgrimage here in order to pray to Our Lady. The monks, denoted by their white robes, mingle with the steady stream of people that arrive in the courtyard which is swathed in flags for this youth festival.

The Black Madonna is a sight to behold, crowned in gold she gestures to the infant Jesus in her arms. From morning to night people come to the Chapel, many praying at length on their knees. On a visit here in 1997 St John Paul II proclaimed Jasna Gora a national shrine. He also bestowed the blood stained sash he was wearing when an attempt on his life was made in 1982, which is now clearly visible behind glass next to the icon itself.

Pope Francis is coming to this shrine to celebrate Mass on the 1050th anniversary of the Baptism of Poland. But it is also his chance to make his own pilgrimage to Mary a much loved mother.