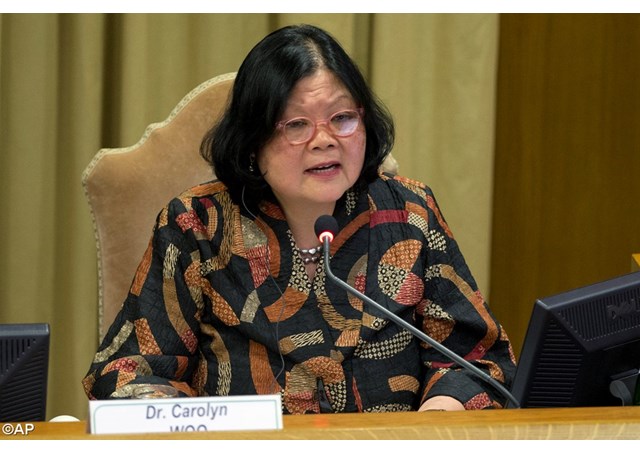 (Vatican Radio)  The Impact Investing Conference 2016 is taking place from 26-28 June in the Vatican, with key business experts and Catholic leaders from around the world exploring ways to harness the power of impact capital to sustain the Catholic Church’s social mission.

Impact investing is a form of investment made into companies or organizations with the goal of providing social benefit to those in need, whilst providing a financial return to the investor.

The three-day Vatican conference is hosted by the Pontifical Council for Justice and Peace in conjunction with Catholic Relief Services (CRS) and carries the title 'Making the Year of Mercy a Year of Impact for the Poor'.

Dr. Carolyn Woo, President and CEO or CRS, spoke to Devin Watkins about the usefulness of impact investing for Catholic social ministries and its conformity with Pope Francis’ magisterium.

Charity and philanthropy not enough

Dr. Woo said the difference between traditional philanthropy and impact investing is the long-term sustainability of the latter.

She said the problems we see in the world include "inequality, but also a lot of displacement of people due to violence, climate change," problems which necessitate a sustained response.

"Impact investing brings in investment capital. So the part of your money, which is in your savings, in your pension funds... Now those investments, there is a percentage now which is coming into funding social enterprises that could both solve problems but that could also deliver a financial return."

"Our goal is to allow this capital to meet social ministries of the Church, in order to allow for private money to serve the poor."

Dr. Woo said that, though currently the majority of impact investment comes from large pension or retirement funds, a new form of small investment is coming to the fore.

"There are now emerging what we call 'retail funds' where you can contribute $30 to buy a share of these impact funds that serve the poor. But that is a new and fairly innovative, emerging vehicle."

Not only for developing countries

Dr. Woo said the social benefit wrought by impact investing can be used for the good even of developed countries and not only in developing areas of the world.

"We actually see a lot of social problems in very rich countries, even in England or in the United States… For example, prisoners who have been released: how do you help them really get a proper start, and where is the funding coming from?"

She said impact investing is also providing funding to programs for disabled children and low-income housing.

"If I run an organization to provide low-income housing, in the old days I would have to go raise money from charity in order to do it. But actually, when you provide low-income housing, the people who have that housing have to pay something into it. It's not a completely free good to them either. So the whole question is: can we get investors who are willing to invest in this? And is there a way to make that housing affordable and at the same time generate a 4 or 5 % return to the investors? If you are completely dependent on philanthropy, many fewer people could have access to that."

But is such a business model really in line with Church teaching?

Dr. Woo has no doubt about the answer. "There is a misunderstanding that the Church never gets into business enterprise. And it's not true. During the Middle Ages, particularly when the monasteries were flourishing, they were actually businesses. They would actually make bread, and they created an infrastructure that could distribute wine and other types of commerce. In fact, double entry accounting was presumably developed by a Franciscan monk."

One gentleman attending the conference, she says, is a man who runs a Catholic Bank in Germany. Another guest represents the Knights of Columbus, which also sells insurance in the United States.

"So the Catholic Church is not unknown to this. There are some ministries in which you will always have to rely on philanthropy but there are a lot of other ministries that maybe a business model could work, rather than just relying on them to give the money away."

Use capitalism for the poor

Dr. Woo agreed that the Vatican Impact Investing Conference and impact investing in general is unquestionably in line with Pope Francis' teachings.

"The Pope actually says we need to use the market. We need to use capitalism to serve the poor, to not exploit the poor. So this is a very creative use of capital to do good while still delivering a return."