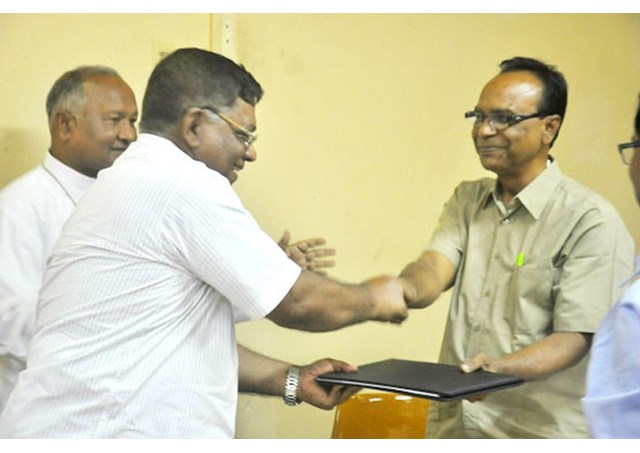 Caritas Bangladesh has a new executive director.  Francis Atul Sarkar took over from  Benedict ‎Alo D'Rozario, who served the social arm of Bangladesh’s Catholic Church in various capacities for 29 years.  ‎ D’Rozario who is  60, served for 11 of these years, as executive director.

At the handover ceremony at the charity’s headquarters in Dhaka on Thursday, Sarkar said Caritas Bangladesh would prioritize helping more poor and downtrodden communities in order to "serve and care" for their development.   "Service is all we aim to offer to more and more people. We will make more effort to help people benefit from the model of service and care of the Catholic Church," he told UCANEWS.  Among those present at the June 23 inauguration of the new Caritas director were Caritas Bangladesh president Bishop Gervas Rozario of Rajshahi and Archbishop Patrick D'Rozario of Dhaka.

Sarkar, 58, from Baradal Parish in the Diocese of Khulna, joined the regional office in southern Bangladesh as an education officer in 1990. For nine years until 2003, he led Caritas Khulna as its regional director.   In 2003, Sarkar worked at Caritas central office in Dhaka as a team member to formulate 'Caritas 10-Year Strategic Plan.' He served as Caritas development director from 2005-2014. After 2014 he worked as Assistant Executive Director (Programmes) at the agency.

Emphasizing Christian values, care and responsibility in Caritas services is a major goal for the organization, Sarkar said.  "Our efforts in services and development are based on Christian values of charity. We would like to strongly maintain that Caritas is different than other NGOs," he said.  To make this happen, he said, Caritas staff would be well equipped as "weapons of service" to establish the church's "philosophy of service."  Another major goal is to motivate people to help each other for development, he said.  "People have a tendency to help each other when in need, and we would like to preserve this motivation. This is so people can participate in development with their own resources, and they can make resilient efforts in situations like disasters, of their own accord," he said.

Despite Christians being a small minority, representing less than half a percent of Muslim-majority Bangladesh's 160 million people, Caritas has made great strides in the development of poor and marginalized communities since independence in 1971.  Currently, eight Caritas regional offices help 2 million families directly with 95 projects that include education, vocational training, livelihood, water, sanitation, health and climate change adaptation programmes.

D'Rozaio, the outgoing executive director, said 93 percent of Caritas Bangladesh funds were spent on services for the people and only seven percent on staff. "This,” he told UCANEWS, “is the lowest rate of administrative expenses among Caritas members in the world."  (Source: UCAN/AsiaNews)