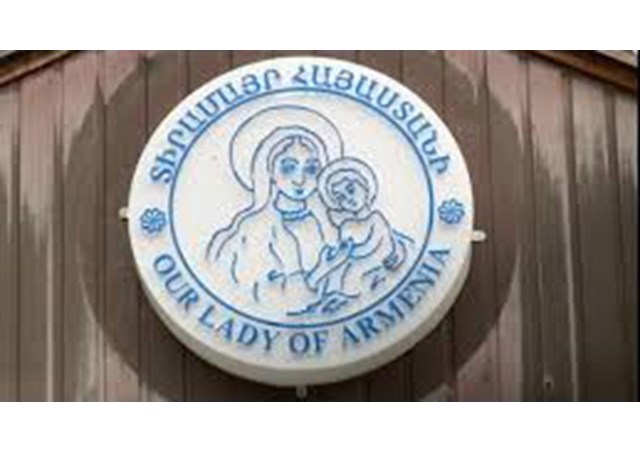 (Vatican Radio)  Following celebration of Holy Mass in Varanans Square on Saturday morning, Pope Francis visited the convent and orphanage of Our Lady of Armenia - Boghossian Education Centre for lunch with around 60 hungry youngsters.

The orphanage is run by the Congregation of the Armenian Sisters of the Immaculate Conception, who also run the Diramyer Vocational School and a day-care center housed on the same campus.

At the end of the visit, a photo opportunity with the orphans helped by the Sisters of the Immaculate Conception, benefactors, and several former residents of the orphanage along with their children provides a highlight to the event.

The History of Our Lady of Armenia Center

With the independence of Armenia, the dream of the Armenian Sisters of the Immaculate Conception to serve in the homeland became a reality. Following the horrible earthquake of 1988, the Sisters had already come to Armenia to console the grief of our nation. Today, the Order has an orphanage, a Vocational School and a day-care Center for the Elderly in Gyumri, a day-care Center in Tashir, a summer camp in Tsaghkadzor and a Convent in Javakhq, Georgia. The Sisters teach catechism and do pastoral work in many of the Catholic villages of the regions of Shirak,  Tashir, and Southern Georgia.

Initially, the Sisters worked in Spitak. In 1992, the Covent was formally established in the village of Arevig and the apostolate of the Sisters consisted in teaching catechism and doing pastoral work in the villages or Arevig, Panik and Lantchig. At the end of 1993, the Sisters moved to Gyumri while continuing their service to the three villages. It was during their religion classes that the Sisters witnessed the deplorable state of many orphaned children. They had lost their parents either during the earthquake or the battle of Nagorno-Karabakh.

In an effort to provide a brief respite to these children, the Sisters organized a summer camp program in 1994. First, the Sisters used rented facilities in Hankavan and Byuragan until the Foundation Alliance Armenienne of Geneva, Switzerland, donated a complex in Tsaghkadzor. Some 850 children, ages 8 to 15 spend a 16-day vacation at the Diramayr Hayastani Jambar.

The success of the camp program is at the genesis of the Our Lady of Armenia-Boghossian Educational Center. It was the wish of Robert Boghossian & Sons family, that an educational Centre be established to house the orphans all year long.

Construction works began in 1996 and the beautiful complex was inaugurated on September 16, 1998. The whole complex is the gift of Fonds Robert Boghossian & Fils and the Sisters are deeply grateful to the generous benefactors who continue to partially fund the running expenses of the Center.

Recruitment of the children is done in different ways. Priority is given to abandoned children, orphans of both parents, children whose fathers have abandoned them and the mother is not capable of providing for the needs of the child.