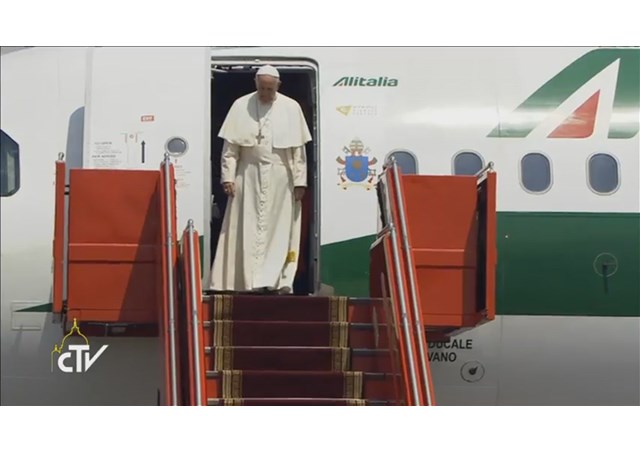 (Vatican Radio) Pope Francis arrived in Armenia’s capital Yerevan at 12.55 pm Rome time on Friday 24th June to begin his 14th apostolic journey abroad. Armenia is a landlocked mountainous nation which borders with to the west Turkey, to the East Azerbaijan, to the north Georgia and to the South Iran.

He was warmly welcomed by the President of the nation’s Republic Serzh Sargsyn and the Catholicos of All Armenia Karekin II. Also present were the Armenian Catholic Patriarch of Armenia Grégoire Pierre XX and other religious and civil authorities.

This visit, to the first country ever to adopt Christianity as a state religion sports a logo which highlighted this historic factor along with the dates of the journey which are the 24th to the 26th of June.

It’s a circular logo divided in half by two colours: yellow for the Vatican and purple for the Armenian city of Etchmiadzin, seat of the Armenian Apostolic Church where Pope Francis is staying as a guest of the Catholicos Karekin II.

Within the design one can spy the outlines of two significant places in Armenia: snow capped Mount Ararat with its biblical connotations and the Monastery of  Kor Virap located on its flanks, which Pope Francis will also visit on Sunday . A significant monastery where Gregory the Illuminator credited for the conversion of this nation to Christianity in 301, so at the beginning of the fourth century, was once held prisoner at the bottom of a well.

Pope Francis follows in the footsteps of John Paul II who visited Armenia in 2001. But this papal visit will take place in a very different context. Pope Francis has made sure that this meeting between churches has a popular element to it. As always during his journeys he has come to be with the people of the nation unusually for Armenia in the public Square.

The first such moment is marked by Holy Mass on Saturday in the north east of the country in the second largest city of the nation Gyumri, hard hit by an earthquake back in 1988. A mass which an estimated 400 000 people are expected to attend.

The second is an ecumenical encounter later in the day to pray for peace in  Yerevan’s main Square. A square which has hosted many artistic events and even concerts by well- known singer of  Armenian origin Charles Aznavour.

Pope Francis is popular in Armenia, a nation where Christian identity blends into Armenian identity. Many of the people especially women wear huge pectoral crosses and taxi drivers make the sign of the cross several times whenever they pass in front of churches.

In fact Armenians know of his proclamation on the 12th of April 2015 of a 10th century Armenian monk St Gregory of Narek as Doctor of the Church. And above all of his words in this same message to mark  the 100th anniversary of  the 1915 'Metz Yeghern' or the great evil as Armenians call the massacres in this nation  at the hand of the Ottoman Empire. A dark chapter in the history of Armenia Pope Francis is set to mark first thing  Saturday  morning when he pays tribute to the memory of the fallen at the ‘Tzitzernakaberd’ Memorial complex where he’ll be meeting with ten descendants of the Armenian refugees housed in the summer residence of Castelgandolfo by his twentieth century predecessor Pius XI.