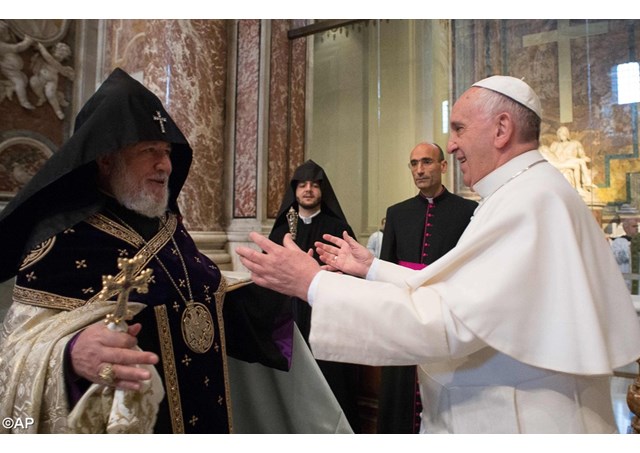 (Vatican Radio) The Director of the Holy See’s Press Office, Father Federico Lombardi, on Tuesday briefed journalists on Pope Francis’ 3-day visit to Armenia taking place from 24-26th of June. He said the papal visit underlines the Pope’s desire to show his closeness to the entire nation of Armenia, whose people who have suffered so much during their long history and who shares their desire for peace.

Father Lombardi noted that the Pope’s visit to Armenia should be considered as the first part of a trip that will take him to three nations in the Caucus region in 2016. The second leg will take place from September 30th to October 2nd when the Pope will travel to Azerbaijan and Georgia.

Armenia has a population of 3.3 million but the diaspora is far larger with up to 10 million people of Armenian descent living outside the country, mainly in Russia and the United States. Just over 9 percent of Armenia’s population is Catholic.

Ecumenism is a key focus of the Pope’s journey to Armenia that follows a visit to the Vatican in April 2015 by Catholicos, Karekin II, the Patriarch of All Armenia, during which a Mass was celebrated in St Peter’s Basilica to commemorate the centenary of the mass killings of Armenians by Ottoman troops in 1915.

During his trip to Armenia, the Pope will meet descendants of those killed during that massacre when he travels to a memorial complex in the city of Tsitzernakaberd situated in the south of the nation. The complex commemorates what is known by Armenians as the Medz Yeghern (Great Evil) when up to 1.5 million Armenians were killed between 1915 and 1923 by troops of the Ottoman Empire.

Father Lombardi also revealed that among the journalists travelling to Armenia for the papal visit is Evangelina Himitian, the daughter of an Armenian evangelical pastor in Argentina and a friend of the then Cardinal Bergoglio during his time as Archbishop of Buenos Aires. The journalist’s grandparents were witnesses and victims of the Ottoman persecution of Armenians and their lives were saved through the help of some Turkish peasants who offered them protection.

Other highlights of the Pope’s programme during his visit to Armenia include the Pope’s meeting with the civil and religious authorities including the Catholicos and other representatives of the Armenian Apostolic Church. The Pope will also visit, Gyumri, Armenia’s second largest city, where he will hold an open-air Mass before returning to the capital to attend an ecumenical meeting and prayer for peace.

On his final day, the Pope will visit the Khor Virap monastery near the Turkish border where he will release doves in the direction of Mount Arafat. The monastery is revered as the site where St. Gregory the Illuminator, the founder of Christianity in Armenia, was imprisoned.