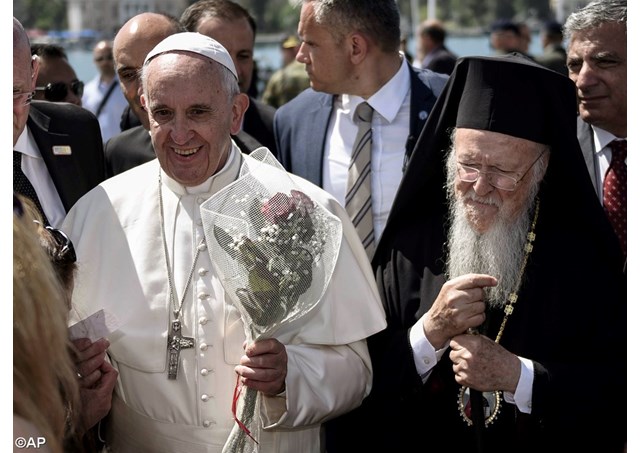 (Vatican Radio) Pope Francis on Sunday urged Catholics to pray for the Orthodox leaders from around the world who are holding their ‘Holy and Great Council of the Orthodox Church’ on the Greek island of Crete.

As chairman of the Council, Ecumenical Patriarch Bartholomew on Sunday presided at a Divine Liturgy in the Metropolitan Church of St Minas in the capital Heraklion, to officially open the week long meeting. Observers from other Christian Churches, including a Vatican delegation headed by Cardinal Kurt Koch of the Pontifical Council for Promoting Christian Unity, are also in Crete and are due to attend the first session of the Council on Monday.

Speaking after the Angelus prayer to thousands of pilgrims and visitors gathered in St Peter’s Square, Pope Francis noted that the Orthodox Church this Sunday marks the solemnity of Pentecost. "Let us unite ourselves in prayer with our Orthodox brothers", the Pope said, calling on the Holy Spirit to send "his gifts on the patriarchs, archbishops and bishops gathered at the Council".

Pope Francis then led the crowd in the recitation of the Ave Maria, praying for all Orthodox Christians as their leaders meet to discuss some of the most pressing issues facing the world community today.