Pope to last Plenary of Council for Laity 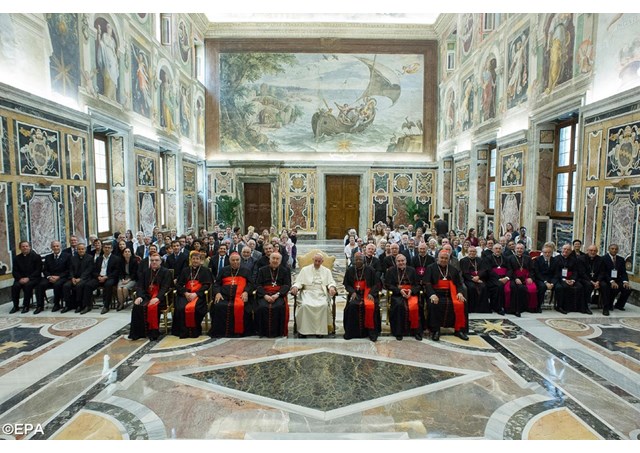 (Vatican Radio)  Pope Francis wants to see the laity more and more involved in the Church’s mission to evangelize in light of the teachings of the Second Vatican Council.  The Pope made that affirmation in an address Friday to participants of the last Plenary Assembly of the Pontifical Council for the Laity ahead of the reform process that will bundle the department together with the Council for the Family and the Academy for Life.

As one phase comes to a close, a new horizon opens for the mission of the laity in the Church, Francis told participants at Friday’s audience. In this, the last plenary of the Pontifical Council for the Laity, the Pope began by thanking those who have worked in this institution of the Curia for their commitment.   The Council was set up after the Second Vatican Council with the blessings of Pope Paul VI.

No to lay people acting on "proxy" of the hierarchy

The Pope recalled the many fruits born over the last 50 years in the context of the laity: World Youth Day, "providential gesture of St. John Paul II", the appearance of new lay associations and the growing role of women in the Church:

"We can say, therefore, that the mandate you have received from the Council was precisely to 'push' the lay faithful to get more and more involved and, better at it, in the evangelizing mission of the Church, not as 'delegates' of the hierarchy, but because [the lay] apostolate [means] 'participation in the salvific mission of the Church, to which all are disciples of the Lord through Baptism and Confirmation'. It is Baptism that makes every lay faithful a missionary disciple of the Lord, salt of the earth, light of the world, yeast that transforms reality from within.

In light of the progress made thus far, the Pope then said "it is time to look again to the future with hope." The reality, he noted, brings new challenges and the idea to amalgamate the dicastery for the Laity with the Pontifical Council for the Family and with the Academy for Life came about in response to the need to reform the Holy See’s Curial offices.

"I invite you to welcome this reform, which will see you involved, as a sign of appreciation and esteem for the work you do, and as a sign of renewed confidence in the vocation and mission of the laity in the Church today,”  the Pope said.

As it navigates new waters, the new department, he noted, will have as its 'helm' the 1988 Apostolic Exhortation Christifideles laici, Evangelii gaudium and Amoris laetitia, all papal documents which have focused on the family and the defense of life.

Reach out to the remote and needy

In the context of the Jubilee of Mercy, he continued, the Church is called to be "permanently going out" and to be an "evangelizing community" which "knows how to take the initiative without fear, to meet, seek out those who are distant and to come out to the crossroads to welcome the excluded."

The Church and the laity, Pope Francis said, need to be outward–looking – seeking out “the many families in trouble and in need of mercy, the many fields of apostolate still unexplored, the many good-hearted and generous lay people who would willingly put at the service of the Gospel their energy, their time, their skills if they were [encouraged to get] involved, and valued and accompanied with affection and dedication on the part of pastors and church institutions. "

"We need well-trained lay people animated by a sincere and limpid faith,” the Pope said. Those whose “life has been touched from the personal and merciful love of Jesus Christ":

"Today,” the Pope concluded, “is the time when young people need the dreams of the elderly" so that they can have "the ability to dream," and so that they can give us "the power of the new apostolic visions".