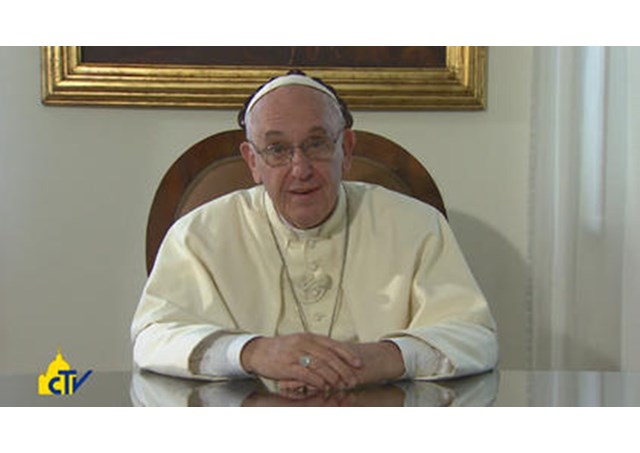 (Vatican Radio) A video message by Pope Francis was released on Friday to highlight an awareness and fund-raising initiative by the Catholic charity Aid to the Church in Need (ACN). The charity’s “Be God’s Mercy” initiative marking the Jubilee Year of Mercy was formally launched at a press conference in the offices of Vatican Radio.

In his video message the Pope urged people to “carry out works of mercy together with ACN in every corner of the world, in order to meet the many, many needs of today.”

Please find below a full English translation of the Pope's video message on behalf of the charity, ACN:

"I want to appeal to all men and women of good will all around the world for a work of mercy to be done in each town, in each diocese, in each association. We, men and women, need God’s mercy, but we also need each other’s mercy. We need to take each other’s hand, caress each other, take care of each other and not make so many wars. I am looking here at the dossier prepared by Kirche in Not, a papal foundation, to carry out works of mercy in the whole world. I trust Kirche in Not with this work… I also entrust them to carry on the spirit they have inherited from Father Werenfried van Straaten who had the vision at the right time to carry out in the world these gestures of closeness, of proximity, of goodness, of love and of mercy. So I invite all of you, together with Kirche in Not, to do, everywhere in the world, a work of mercy but one that stays, a permanent work of mercy; a structure for so many needs that there are today in the world. I thank you for everything you do. And do not be afraid of mercy: mercy is God’s caress."

ACN projects supported during the four-month “Be God’s Mercy” campaign in 2016 include prison ministry, drug rehabilitation centres and support groups for women who have suffered violence.

The charity said Pope Francis has supported an ACN project providing medicine for St Joseph’s Clinic, Erbil, in the Kurdish north of Iraq, which serves 2,800 displaced people who fled their homes when militants of the so-called Islamic State group captured large swathes of Iraqi territory.

Also speaking at the press conference was Archbishop Sebastian Shaw of Lahore, Pakistan, who gave an account of the atrocity on Easter Sunday in Yohannabad near Lahore where suicide bombers killed 76 people in a park, most of them Christian families celebrating Easter with a picnic.  Archbishop Shaw was interviewed by Susy Hodges after the press conference:

Listen to the interview with Archbishop Sebastian Shaw of Lahore:

Christians in Pakistan form a tiny minority and have been long been the victims of targeted attacks by Islamic extremists but the suicide bombing on Easter Day outside Lahore was by far the bloodiest attack since 2113.  Asked about the morale of Catholics living in Pakistan, Archbishop Shaw said “fear was always there” but despite this Christians were "strong in their faith" and “morale was still high.”

Turning to Pope Francis’ video message to highlight the “Be God’s Mercy” awareness and fund-raising campaign organized by the ACN, Archbishop Shaw said they were “very much encouraged” by this papal gesture. He also disclosed that they had received financial aid from the Pope to help the victims of the Easter Day suicide bombing and spoke of his gratitude for this.