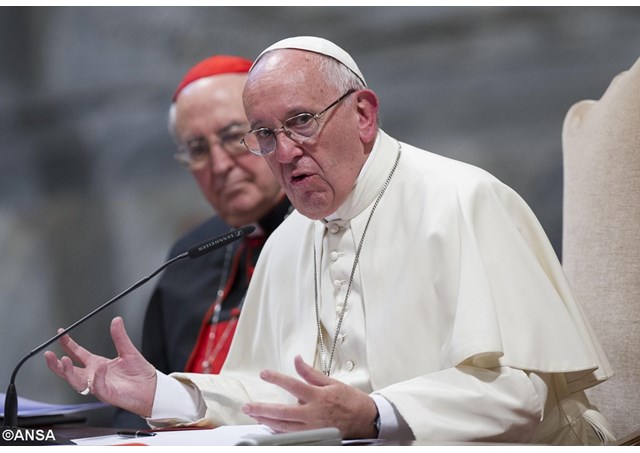 (Vatican Radio) Pope Francis opened the annual Ecclesial Convention of the Rome Diocese on Thursday evening at Rome’s cathedral: the Papal Archbasilica of St. John Lateran. During the course of the inaugural event, the Holy Father responded to questions from several participants, each centered on specific aspects of the over-arching theme of the three-day event: the family and the joy of love.

In one response in particular, Pope Francis renewed his criticism of our “provisional” and “throw-away” culture, which has largely become incapable of thinking that any good – even one’s word – could possibly be lasting and worth preserving no matter what the cost.

“We too live a culture of the provisional,” said Pope Francis in response to a question from the floor regarding what needs – and what can – be done in order better to ensure the success and flourishing of marriages, and of people in married life within the Church and the broader society. In answer, the Holy Father told a story of a bishop from whom he recently heard tell of a young fellow who had finished his university studies and told the prelate he was interested in the priesthood, “but [only] for ten years,” the Holy Father reported his unnamed interlocutor as having quoted the nameless young fellow as saying. “This is the culture of provisional,” said Pope Francis, “and this happens everywhere, even in the priesthood, religious life – the  provisional – is why a large majority of our sacramental marriages are null: because they say, “Yes, all my life,” but they do not know what it is they are saying, because they have another culture.”

Pope Francis went on to tell of how he banned matrimonios de apuro – or “rush marriages” usually celebrated when a young unmarried couple found themselves expecting a child – in Buenos Aires when he was archbishop there, because he felt the couples were in general acting out of social pressure rather than an informed understanding of the weight and significance of Christian marriage. “The crisis in marriage,” he said, “is because people don’t know what the sacrament is, what the beauty of the sacrament is: people do not know that it is indissuluble, they do not know that it is for life – it is difficult.”

The Convention will continue until Friday with a series of thematic workshops on dedicated to a series of sub-themes, including: love between adolescents; marriage preparation; spousal love; fidelity; the joy of giving life; family and brotherhood.