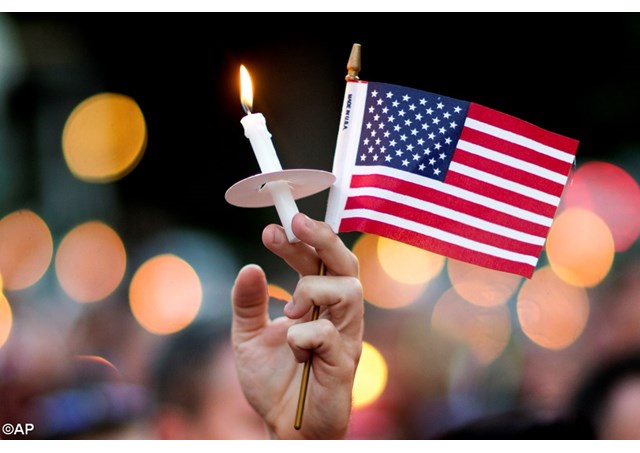 (Vatican Radio)  U.S. bishops have condemned early Sunday’s mass shooting at a gay nightclub in Orlando, Florida and are offering prayers for the victims and their families.

At least 50 people were killed and 53 others wounded when an Afghan American opened fire on club goers with an assault weapon. It was the worst mass shooting in U.S. history.

Bishop John Noonan of Orlando issued a statement Sunday in which he said:

“A sword has pierced the heart of our city. Since learning of the tragedy this morning, I have urged all to pray for the victims, the families and first responders. I pray that the Lord’s mercy will be upon us during this time of sadness, shock and confusion. I urge people of faith to turn their hearts and souls to the great physician, our Lord Jesus Christ, who consoles and carries us through suffering with mercy and tenderness. The healing power of Jesus goes beyond our physical wounds but touches every level of our humanity: physical, emotional, social, spiritual. Jesus calls us to remain fervent in our protection of life and human dignity and to pray unceasingly for peace in our world.

Priests, deacons and counselors from the Diocese of Orlando and Catholic Charities of Central Florida are serving at the Aid Center established by the City of Orlando. They are on site helping victims and families on the front lines of this tragedy. Throughout the day, they are offering God’s love and mercy to those who are facing unimaginable sorrow. They will remain vigilant and responsive to the needs of our hurting brothers and sisters.

I have asked all of our parishes to include prayer intentions during the celebration of Sunday Mass today where close to 400,000 registered Catholics participate in nine counties of Central Florida. At our 91 parishes and missions, today’s prayers have been offered for victims of violence and acts of terror...for their families and friends...and all those affected by such acts against God's love. We pray for the people of the city of Orlando that God's mercy and love will be upon us as we seek healing and consolation.

Prayer vigil for victims and families

"Recognizing the affliction brought to our city, our families and our friends," said Bishop Noonan, "we invite the community to join us for a ‘Vigil to Dry Tears’ for all who are affected by this massive assault on the dignity of human life. It will be held on Monday, June 13, at 7:00 p.m. in St. James Cathedral.

I hope this opportunity to join each other in prayer will bring about an outpouring of the mercy of God within the heart of our community."

In a statement, the President of the U.S. Conference of Catholic Bishops, Archbishop Joseph Kurtz  said “waking up to the unspeakable violence in Orlando reminds us of how precious human life is. Our prayers are with the victims, their families and all those affected by this terrible act. The merciful love of Christ calls us to solidarity with the suffering and to ever greater resolve in protecting the life and dignity of every person.”

Archbishop Blase J. Cupich of Chicago also issued a statement, saying, “Our prayers and hearts are with the victims of the mass shooting in Orlando, their families and our gay and lesbian brothers and sisters.  We are grateful to the first responders and civilians who heroically put themselves in harm’s way, providing an enduring reminder of what compassion and bravery look like--even in the face of such horror and danger. In response to hatred, we are called to sow love. In response to violence, peace. And, in response to intolerance, tolerance.

The people of the Archdiocese of Chicago stand with the victims and their loved ones, and reaffirm our commitment, with Pope Francis, to address the causes of such tragedy, including easy access to deadly weapons. We can no longer stand by and do nothing.”