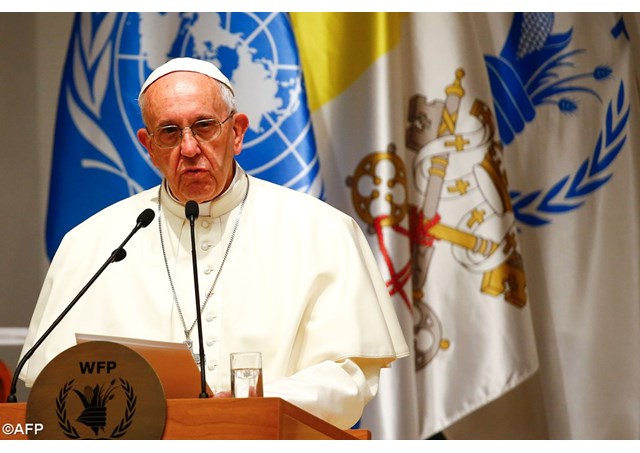 (Vatican Radio) Pope Francis says it is a “strange paradox” that food often cannot get through to those suffering due to war but weapons can.

He was speaking on Monday during his first visit to the World Food Program, the Rome-based United Nations agency that fights hunger.

WFP is currently engaged in and committed to the “One Future Zero Hunger” Global Goal set by world leaders for 2030.

Reflecting bitterly on the fact that that while the distribution of food supplies are often obstructed in war zones, weapons - Pope Francis said - are trafficked freely.

“As a result, wars are fed, not persons” and he continued: “In some cases hunger itself is used as a weapon of war” as  the number of people dying of hunger and thirst  is added to that of battlefield casualties and the civilian victims of conflicts and attacks.

“We are fully aware of this – he said – yet we allow our conscience to be anesthetized”.

The Pope  also lamented that the speed and volume of information in today's world has led to what he called the “naturalization” of extreme poverty.

In other words – he said – little by little we are growing immune to other people’s tragedies, seeing them as something “natural”: “we are bombarded by so many images that we see pain, but do not touch it; we hear weeping, but do not comfort it; we see thirst but do not satisfy it”.

As long as poverty has no face the Pope pointed out: “we run the risk of bureaucratizing the suffering of others.”

Noting yet another paradox of our culture, Francis said that hunger persists despite a surplus of food, and global waste.

The cause of  food shortage – the Pope said – is to be found in a selfish and wrong distribution of resources and in the “merchandising” of food. “we – he said - have made the fruits of the earth – a gift to humanity – ‘commodities’ for a few. We need to be reminded  that food discarded is food stolen from the table of the poor and the starving.

Pope Francis concluded his address to a packed auditorium of WFP officials referring to one of the axioms of Christianity: "I was hungry and you gave me food; I was thirsty and you gave me something to drink". It is a principle – he said - which is independent of creeds and convictions and it can serve as a golden rule and as a measure of our humanity as we continue to seek creative solutions of change and transformation.