Pope Francis at Mass: the lesson of Elijah 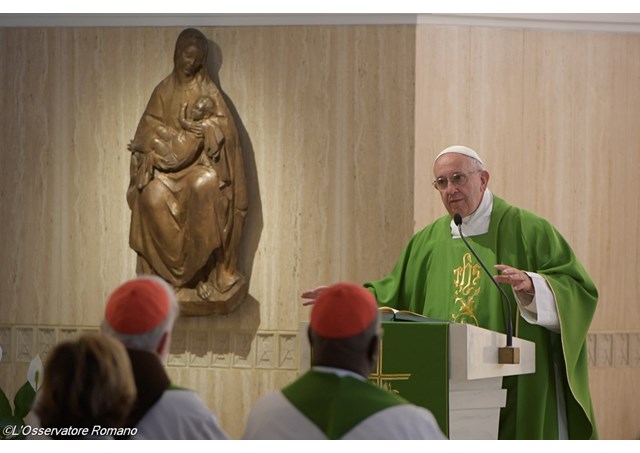 (Vatican Radio) Pope Francis celebrated Mass in the chapel of the Casa Santa Marta on Friday morning. In remarks to the faithful following the Readings of the Day, the Holy Father focused on three attitudes that are characteristic of the Christian: “standing” before God in “silence” to hear His voice and readiness to “go out” into the world to proclaim what one has heard to others. The Pope also warned against the danger of paralyzing fear in Christian life, no matter where one is in one’s journey with God and regardless of one’s state of life in the Church:

To explore this issue, and how to escape the tunnel of fear, the Pope focused on the the prophet Elijah, from whose book the First Reading of the Day was taken. The Holy Father recalled how Elijah was victorious, how he “fought so much for the faith,” and defeated hundreds of idolaters on Mount Carmel. Then, he reaches a breaking point: one of the many acts of persecution aimed at him finally hit its mark, and he collapses in discouragement under a tree, waiting to die – except that God does not leave him in that state of prostration, but sends an angel with an imperative: get up, eat, go out:

“To meet God it is necessary to go back to the situation where the man was at the time of creation, standing and walking. Thus did God created us: capable of standing full upright before Him, in his image and likeness, and on our way with Him. ‘Go, go ahead: cultivate the land, make it grow; and multiply.’ [Then, to Elijah], ‘Enough! Go out and go up to the mountain and stand on the mountaintop in my presence.’ Elijah stood up on his feet, he set off on his way.”

The strain of a sonorous silence

Go out, and then to listen to God: only how can one be sure to meet the Lord on the way? Elijah was invited by the angel to go out of the cave on Mount Horeb, where he found shelter to stand in the “presence” of God. However, it is not the “mighty and strong” wind that splits the rocks, nor the earthquake that follows, nor even the fire that follows, which finally induces Elijah to go out:

“So much noise, so much majesty, so much bustle - and the Lord was not there. ‘After the fire, the whisper of a gentle breeze’ or, as it is in the original, ‘the strain of a sonorous silence’: and the Lord is there, speaking to us in it.

The hour of the mission

The angel’s third request to Elijah is: “Go out.” The prophet is invited to retrace his steps, to the desert, because he was given an assignment to fulfill. In this, emphasizes Francis, is captured the stimulus “to be on the way, not closed, not within the selfishness of our comfort,” but “brave” in “bringing to others the message of the Lord,” which is to say, “[to go on a] ‘mission’”:

“We must always seek the Lord. We all know how are the bad moments: moments that pull us down, moments without faith, dark, times when we do not see the horizon, we are unable to get up. “We all know this, but but it is the Lord who comes, who refreshes us with bread and with his strength and says: ‘Arise and be on your way! Walk!’ In order to meet the Lord we must be so: standing upright and on our way; then waiting for Him speak to us, with an open heart; and He will say, ‘It is I’ and there faith becomes strong – [and] is this faith for me to keep? No: It is for us to bring to others, to anoint others with it – it is for mission.”