Pope: Those who say “this or nothing” are heretics not Catholics 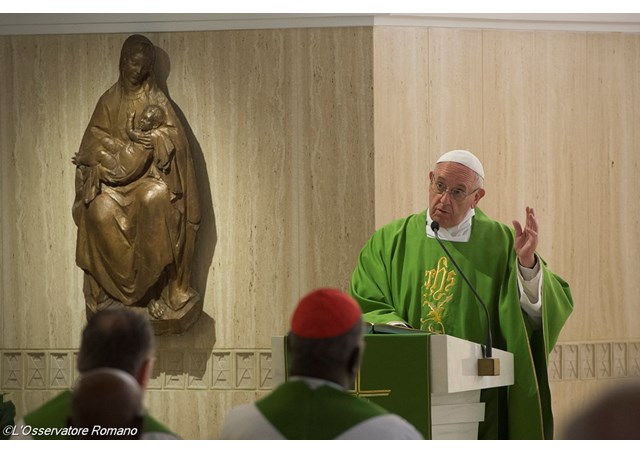 (Vatican Radio)  Pope Francis warned on Thursday against an excessive rigidity, saying those within the Church who tell us “it’s this or nothing” are heretics and not Catholics. His remarks came during the morning Mass on Thursday celebrated at the Santa Marta residence.

In his homily the Pope reflected on the harm caused by Churchmen who do the opposite of what they preach and urged them to free themselves from a rigid idealism that prevents reconciliation between each other.

Taking his cue from Jesus’ warning to his disciples that unless their righteousness surpasses that of the scribes and Pharisees they will not enter into the Kingdom of Heaven, Pope Francis stressed the importance of Christian realism. Jesus, he said, asks us to go beyond the laws and love God and neighbour, stressing that whoever is angry with their brother will be liable to judgement.

Insulting our brother is like giving a slap to his soul

The Pope said we have “a very creative vocabulary for insulting others” but stressed that such insults are a sin and are akin to killing because they are giving a slap to our brother’s soul and to his dignity. Noting the presence of several children at the Mass, Pope Francis urged them to stay calm, saying the preaching of a child in a church is much more beautiful than that of a priest, bishop or of the Pope.

Jesus, said the Pope, urged his confused people to look beyond and go forward.  But at the same time, Christ warned about the harm caused to the people of God by Christians who do not follow their own teachings.

“How many times do we in the Church hear these things: how many times!  ‘But that priest, that man or that woman from the Catholic Action, that bishop, or that Pope tell us we must do this this way!’ and then they do the opposite. This is the scandal that wounds the people and prevents the people of God from growing and going forward. It doesn’t free them. In addition, these people had seen the rigidity of those scribes and Pharisees and when a prophet came to give them a bit of joy, they (the scribes and Pharisees) persecuted them and even murdered them; there was no place for prophets there.  And Jesus said to them, to the Pharisees: ‘you have killed the prophets, you have persecuted the prophets: those who were bringing fresh air.’”

Follow the healthy realism of the Church: No to idealism and rigidity

Pope Francis urged his listeners to recall how Jesus’s request for generosity and holiness is all about going forward and always looking out beyond ourselves. This, he explained, frees us from the rigidity of the laws and from an idealism that harms us. Jesus knows only too well our nature, said the Pope, and asks us to seek reconciliation whenever we have quarrelled with somebody.  He also teaches us a healthy realism, saying there are so many times “we can’t be perfect"  but "do what you can do and settle your disagreements.”

“This (is the) healthy realism of the Catholic Church: the Church never teaches us ‘or this or that.’ That is not Catholic. The Church says to us: ‘this and that.’ ‘Strive for perfectionism: reconcile with your brother.  Do not insult him. Love him. And if there is a problem, at the very least settle your differences so that war doesn’t break out.’ This (is) the healthy realism of Catholicism. It is not Catholic (to say) ‘or this or nothing:’ This is not Catholic, this is heretical.  Jesus always knows how to accompany us, he gives us the ideal, he accompanies us towards the ideal, He frees us from the chains of the laws' rigidity and tells us: ‘But do that up to the point that you are capable.’ And he understands us very well.  He is our Lord and this is what he teaches us.”

Reconciling amongst ourselves is the tiny sanctity of negotiation

Pope Francis concluded his homily by reminding how Jesus exhorted us to avoid hypocrisy and do what we can and at the very least avoid disputes amongst ourselves by coming to an agreement.

“And allow me to use this word that seems a bit strange: it’s the tiny sanctity of negotiations. ‘So, I can’t do everything but I want to do everything, therefore I reach an agreement with you, at least we don’t trade insults, we don’t wage a war and we can all live in peace.’ Jesus is a great person! He frees us from all our miseries and also from that idealism which is not Catholic. Let us implore our Lord to teach us, first to escape from all rigidity but also to go out beyond ourselves, so we can adore and praise God who teaches us to be reconciled amongst ourselves and who also teaches us to reach an agreement up to the point that we are able to do so.”