Pope: 'The Beatitudes guide us on the path of Christian life' 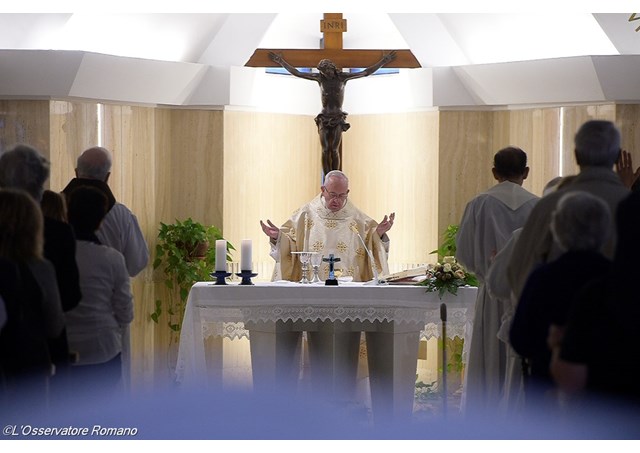 (Vatican Radio) Pope Francis has urged Christians to follow the indications provided in the Beatitudes in order to avoid taking the path of greed, vanity and egoism.

Speaking on Monday morning during Mass at the Casa Santa Marta the Pope drew inspiration from the Gospel of Matthew and said the Beatitudes can be used as “navigators” that shine the light on the pathway of Christian life.

Reflecting on the famous Sermon on the Mount, Pope Francis said Jesus’ teaching on that occasion did not erase the old law; rather it ‘perfected’ it bringing it to its fullness:

"This is the new law, the one we call ‘the Beatitudes’. It’s the Lord’s new law for us”.

He described it as the roadmap for Christian life which gives us the indications to move forward on the right path.

The Pope continued his homily commenting on the words of the evangelist Luke who also speaks  of the Beatitudes and lists what he calls the ‘four woes’: ‘Woe to the rich, to the satiated, to those who laugh now, to you when all speak well of you’.

And recalling the fact that many times he has said that riches are good, what’s bad the Pope reminded us is ‘the attachment to riches’ which becomes idolatry.

"This is the anti-law, the wrong navigator. The three slippery steps that lead to perdition, just as the Beatitudes are the steps that take us forward in life” he said.

And elaborating on that thought the Pope said the three steps that lead to perdition are:

“the attachment to riches, because I need nothing;”

“Vanity – that all must speak well of me, making me feel important, making too much of a fuss… and I am convinced to be in the right” he said, referring also the parable of the self-righteous Pharisee and the Tax Collector: “O God I thank you that I am such a good Catholic, not like my neighbor…”

“The third – he said – is pride, the satiation and the laughter that closes one’s heart”.

Of all the Beatitudes – the Pope said there is one in particular: “I’m not saying it is the key to all of them, but it induces us to much reflection and it is: Blessed are the meek. Meekness”.

“Jesus says of himself: ‘learn from me for I am meek of heart’, I am humble and gentle at heart. To be meek is a way of being that brings us close to Jesus” he said.

“The opposite attitude, Pope Francis concluded, always causes enmities and wars…lots of bad things that happen. But meekness, meekness of heart which is not foolishness, no: it’s something else. It’s the capacity to be deep and to understand the greatness of God, and worship Him”.