Pope Francis: Perseverance in prayer needed, but not "magic wand" 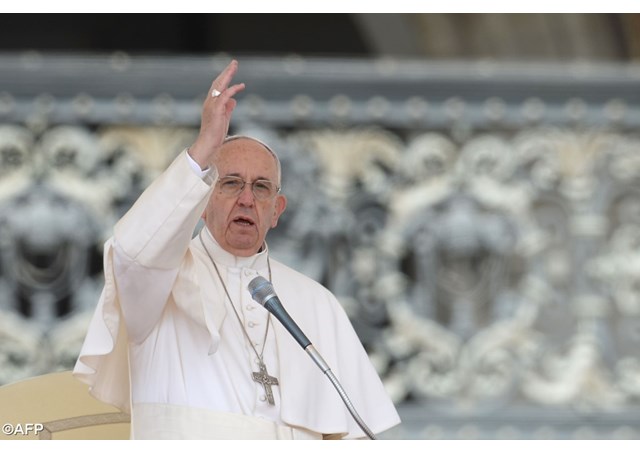 (Vatican Radio) Pope Francis on Wednesday said “prayer is not a magic wand.” He was speaking during his weekly General Audience in St. Peter’s Square.

In the parable, the persistence of a widow forces the unjust judge to grant her request for justice, “so that she will not eventually wear [him] out.” (Lk 18: 1-8).

“Widows, together with orphans and foreigners, were the most vulnerable groups of society” – Pope Francis said – “The rights secured to them by the Law could be easily trampled upon because, being alone and helpless, it was difficult from them to avail themselves: A poor widow, there, alone, no one to defend her, she could be ignored, even denied justice; thus also with the orphan, the foreigner, the migrant…at that time this was a very great problem.”

The Holy Father said the widow in the parable used the only weapon she had: Her persistence is presenting her request for justice, “and this persistence achieved its goal.”

Pope Francis said if the widow can bend the will of the Unjust Judge, then God, who is “a good and just Father,” will “do justice to those who cry out to him day and night.”

“All of us experience moments of fatigue and discouragement, especially when our prayers seem ineffective,” Pope Francis said.

“But Jesus assures us: unlike the unjust judge, God promptly answers promptly his children, although this does not mean he does it in the time and manner that we would like. Prayer is not a magic wand!” – continued the Pope – “It helps to preserve our faith in God, and to trust in Him even when we do not comprehend His will. In this, Jesus himself - who prayed so much! – is the example.”

Pope Francis gives the example of Our Lord’s prayer at Gethsemane, where he prayed for the Father to “deliver him from the bitter cup of the passion.”

“But his prayer is permeated by faith in the Father, and trusts without restraint in His will: But – says Jesus – not as I will, but as you will,” Pope Francis explained.

“The goal of the prayer is of secondary importance; what matters above all is the relationship with the Father,” – the Pope continued – “This is what makes the prayer transform the desire and shape it according to the will of God, whatever it may be, because the person who prays first of all aspires to union with God, who is Merciful Love.”

Pope Francis concluded his catechesis by mentioning the parable ends with a question: When the Son of Man comes, will he find faith on the earth?

“And with this question we are all warned: we must not desist from prayer, even if it is not answered,” the Pope said. “And it is the prayer which keeps the faith, without this, the faith wavers”

“We ask the Lord for a faith which becomes unceasing prayer, persevering, like that of the widow in the parable, a faith that is nourished by the desire of his arrival. And in this prayer we experience the compassion of God, like a Father who comes to meet his children full of merciful love.”

After his catechesis, Pope Francis prayed for the victims of terrorist attacks that took place in Syria on Monday, and also made an appeal for International Missing Children’s Day.