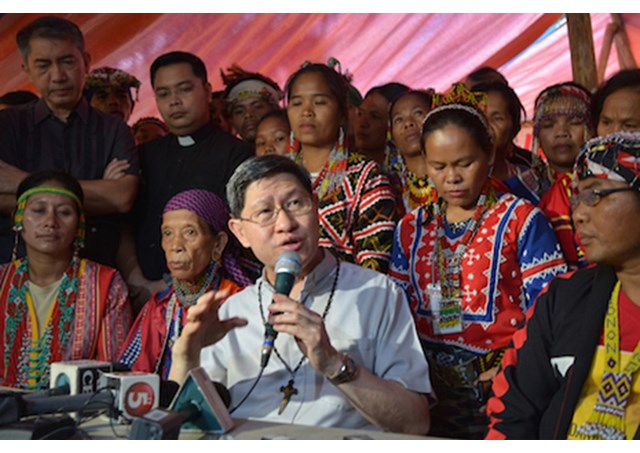 Drawing from the experience of the Church—and especially the experience of the local churches—he said the first concrete step is to consider human beings seriously. He said it is “sad” if policy-makers think only in terms of statistics and theories. “While that might be necessary,” he said, “I think the first concrete [step] is to go back to the human beings. Hold the hand of a survivor of a calamity. Enter the shack of a refugee family. Listen to the stories.”

Cardinal Tagle also spoke of the importance of the principle of solidarity. International donors and agencies offer much-needed help to victims of natural or man-made disasters, but they must be respectful of the local communities, which “know their cultures, their needs, their situations better.” He said it is important to enable local communities “to really get involved in their own rehabilitation, the rebuilding of their lives.”

Finally, he said, it is necessary “to address the process of the conflicts that drive people away from their homes.” Confronting and dealing with the causes of calamities “would help us cope with these changes, prevent disasters, etc.”

During the Summit, Cardinal Tagle spoke to the participants on the importance of religion in humanitarian aid efforts. In his interview with Vatican Radio, he said he had proposed tapping into “the wisdoms and the treasures contained in the different religions to address the conflicts, not just extending compassion to the victims.” He asked what resources religions have to instil peace, to build bridges, and to help humanity become more reconciled and peace-loving. “I’m sure the different religions have enough resources,” Cardinal Tagle said. “But can we tap them?”

Listen to the full interview of Cardinal Luis Tagle with Linda Bordoni: