Pope: Understanding for sinners, no negotiating the truth 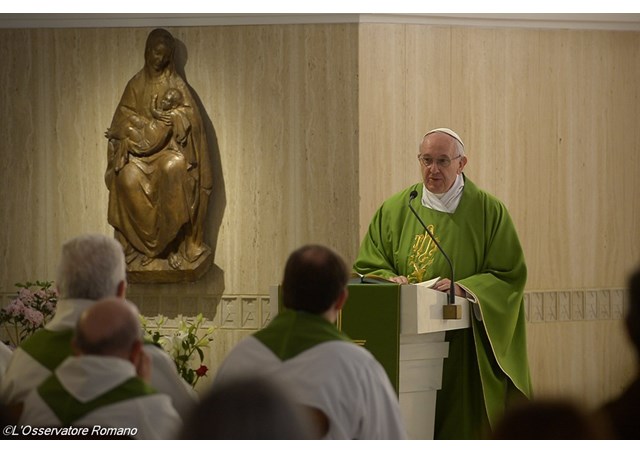 (Vatican Radio) Announcing the word of God should never be dissociated from the understanding of human weakness. That was Pope Francis’ message during the daily Mass at the Casa Santa Marta. Commenting on the Gospel passage in which Christ speaks with the Pharisees about adultery, he said the Lord overcomes the human vision which would reduce the vision of God to a casuistic equation.

The Gospel, the Pope said, is full of examples of the Pharisees and the doctors of the law attempting to trap Jesus by catching Him off guard, seeking to undermine the authority and favour he enjoys with the people. One of those attempts is related in the day’s Gospel, in which the Pharisees tempt Him by asking if it is licit for a man to put away his wife.

Pope Francis speaks of the “trap” of “casuistry,” concocted by “a small group of enlightened theologians,” convinced that they “have all the knowledge and wisdom of the people of God.” It is a snare from which Jesus escapes, he says, by going “beyond,” “to the fullness of matrimony.” The Lord had already done so with the Sadducees, the Pope recalled, when they had questioned Him about the woman who had had seven husbands. At the resurrection, Jesus affirmed, she would not be the wife of any of them, because in heaven “they neither marry nor are given in marriage.”

In that case, the Pope said, Christ looked to the “eschatological fullness” of marriage. With the Pharisees, on the other hand, He referred to “the fullness of the harmony of creation.” “God created them male and female,” and “the two became one flesh.”

“But Jesus,” Pope Francis continued, “so merciful, He is so great, that he never, never, never, closes the door to sinners.” And so He does not limit Himself to proclaiming the truth of God, but goes on to ask the Pharisees what Moses had established in the Law. And when the Pharisees responded that Moses permitted a husband to write a bill of divorce, Jesus replied that this was permitted “because of the hardness of your hearts.” That is, the Pope explained, Jesus always distinguished between the truth and “human weakness” without “twisting words.”

In the world in which we live, with this culture of the provisional, this reality of sin is so strong. But Jesus, recalling Moses, tells us: “But there is hardness of heart, there is sin, something can be done: forgiveness, understanding, accompaniment, integration, discernment of these cases… But always… But the truth is never sold. And Jesus is capable of stating this very great truth, and at the same time being so understanding with sinners, with the weak.

Forgiveness is not an equation

And so, Pope Francis emphasized, these are “the two things that Jesus teaches us: truth and understanding.” This is what the “enlightened theologians” fail to do, because they are closed in the trap of “a mathematical equation” of “Can it be done? Can it not be done?” and so they are “incapable both of great horizons, and of love” for human weakness. It is enough to see, the Pope concluded, the “delicacy” with which Jesus treated the adulteress woman who was about to be stoned: “Neither do I condemn you: Go forth, and sin no more.”

May Jesus teach us to have at heart a great adhesion to the truth, and also at heart a great understanding and accompaniment for all our brothers who are in difficulty. And this is a gift, this is what the Holy Spirit teaches us, not these enlightened doctors, who to teach us need to reduce the fullness of God to a casuistic equation. May the Lord give us this grace.