Pope Francis: ‘To ignore the poor is to despise God’ 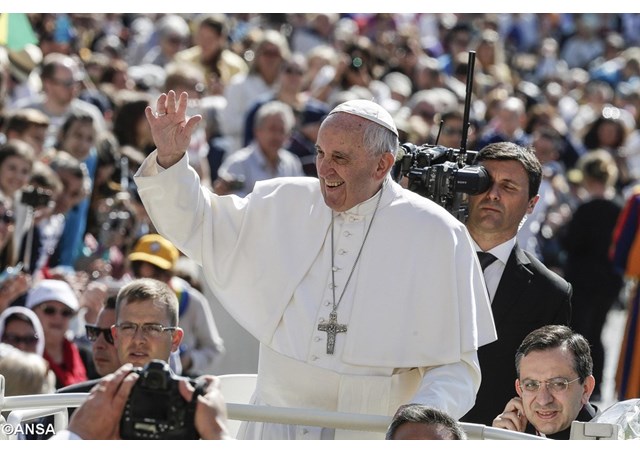 (Vatican Radio) Pope Francis says that to ignore the poor is to despise God and that the Lord’s mercy for us is tightly connected to our own mercy for others.

Speaking on Wednesday morning at the weekly General Audience in St. Peter's Square the Pope also decried the inequality and contradictions in the world as he reflected on the parable of the rich man and Lazarus.

He noted that the lives of these two people seem to run on parallel tracks; their living conditions are opposite and totally non-communicating: the rich man’s front door is always closed to the poor man who hopes to eat some leftovers from the rich man's table. Every day the rich man – who wears luxurious clothes while Lazarus is covered with sores – fares sumptuously while Lazarus is starving.

“Lazarus represents the silent cry of the poor of all times and the contradictions of a world where vast wealth and resources are in the hands of few”.

Speaking of how the rich man pleaded with Abraham when he died claiming to be his son and to belong to the people of God, Francis pointed out that  in life he showed no consideration for God but made himself the center of everything, “locked in his own world of luxury and waste”.

By excluding Lazarus, he explained, the rich man did not take the Lord or his law into account.
“To ignore the poor is to despise God!” he said.

And commenting on the second part of the parable, the Pope noted that after death the situation is reversed: “Lazarus is carried to heaven by the angels while the rich man falls into the torments of suffering”.

Now, he said, the rich man recognizes Lazarus and asks for help, while in life he pretended not to see him.

Pope Francis said Abraham refuses to heed the rich man’s pleas and explains that “good and evil have been distributed to compensate earthly injustice, and that “the door that separated the rich from the poor in life has been transformed into a deep abyss.”

“As long as Lazarus was lying in front of his house, there was the chance of salvation for the rich man, but now that they are both dead, the situation has become irreparable” he said.

The parable, the Pope said, is a clear warning: “God's mercy for us is related to our mercy for our neighbor; […] If I do not open the doors of my heart to the poor, the door stays closed for God too. And this is terrible”.

At this point, the Pope continued, the rich man thinks of his brothers who are likely to meet the same fate and asks that Lazarus may return to the world to warn them. But Abraham points out that they must listen to Moses and to the prophets.

“To convert ourselves, we should not expect miraculous events, but open our hearts to the Word of God who calls us to love God and our neighbor” he said.

Pope Francis concluded saying that the Word of God can revive a withered heart and heal it of blindness, and that God’s saving message overturns the situations of this world by the triumph of His justice and mercy.