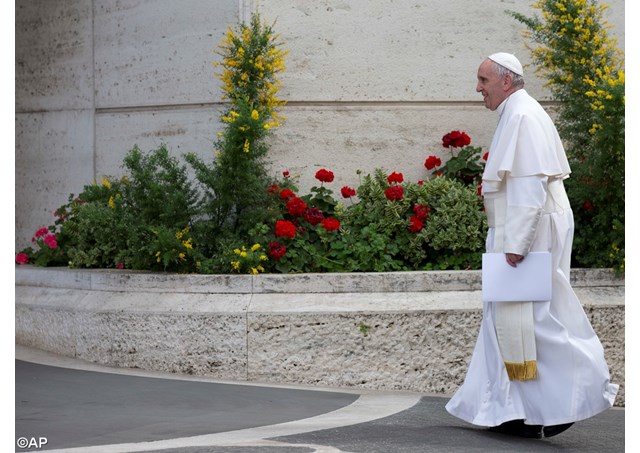 (Vatican Radio) Pope Francis has given an exclusive interview to the French Catholic La Croix newspaper. In the broad-ranging conversation with journalists Guillaume Goubert and Sébastien Maillard for La Croix, Pope Francis discussed matters ranging from healthy secularism and the right way to understand and live according to the Church’s universal missionary mandate, to the idea of Europe in relation to the migration crisis and the possibility of peaceful coexistence among Muslims and Christians. He also addressed the clergy sex abuse crisis, offering considerations about an ongoing investigation – widely covered in France – involving the Archbishop of Lyon, Cardinal Philippe Barbarin, whose handling of the case of one pedophile priest in particular has been subject to scrutiny and criticism.

“It is true that it is not easy to judge the facts after decades, in another context,” said Pope Francis.

Nevertheless, “For the Church in this area, there can be no statute of limitations: for these abuses, a priest who is called to lead people to God destroys a child. He spreads evil, resentment, pain. As Benedict XVI said, tolerance must be zero.”

Asked specifically and explicitly about whether he thinks Cardinal Barbarin ought to resign, Pope Francis answered, “No, that would be a contradiction, an imprudence. We shall see after the conclusion of the trial. But now it would be tantamount to his calling himself culpable.”

The Holy Father spoke of the challenges and opportunities facing the Church in France, which he described as, “The eldest daughter of the Church, but not the most faithful.” After a brief moment of laughter, the Holy Father added, “In the 1950s, France was called a ‘mission country’. In this sense, it is a periphery to evangelize. To be fair with France:  the Church there has a creative capacity all its own. France is also a land of great saints, great thinkers: Jean Guitton, Maurice Blondel, Emmanuel Levinas - who was not Catholic - Jacques Maritain. I also think the depth of literature.

I also like how French culture has permeated Jesuit spirituality in relation to the more ascetic Spanish current. The French current, which began with [St.] Peter Faber, while still insisting on the discernment of the mind, gives another flavor, with the great French spiritual figure, Louis Lallemant, Jean Pierre de Caussade – and with the great French Jesuit theologians, who helped the Society of Jesus so much: Henri de Lubac and Michel de Certeau. These last two I like a lot: two Jesuits who are creative. In short, this is what fascinates me with France. On the one hand, the exaggerated secularism, the legacy of the French Revolution and on the other, so many great saints.”

His interviewers inquired after any concrete plans to visit France. “I received President François Hollande’s letter of invitation a short while ago. The Bishops’ Conference also invited me. I do not know when this trip will be, because next of year’s election in France and, in general, the Holy See’s practice is not to make such a trip in such a period. Last year, some hypotheses began to be formulated for such a trip, including a visit to Paris and its suburbs, to Lourdes, to a city where no pope visited – Marseille for example – which represents an open door to the world.”

The Holy Father also responded to a query regarding the shortage of priests.

“Korea offers an historical example,” he said. “That country was evangelized by missionaries from China, from whose work the faith spread there. Then, for two centuries, Korea was evangelized by laymen. It is a land of saints and martyrs today with a strong Church. To evangelize, there need not necessarily be priests. Baptism gives strength to evangelize – and the Holy Spirit received in Baptism grows outward, to carry the Christian message with courage and patience. The Holy Spirit is the protagonist of the Church, the Church’s engine. Too many Christians do not know this. In contrast, a danger to the Church is clericalism: it is a sin that takes two to commit, like the tango. The priests want to ‘clericalize’ the laity and the laity demand to be clericalized, for the sake of ease. In Buenos Aires, I knew many good priests who, seeing a capable layman, immediately exclaimed, ‘Let's make a deacon!’ No, let him remain a layman. Clericalism is important particularly in Latin America. If popular piety there is strong, it is precisely because it is the initiative of the laity on their own, and not a clerical thing. It remains misunderstood by the clergy.”

Another major focus of the conversation was the migration crisis.

Asked whether he thinks Europe really can accommodate the numbers of migrants seeking refuge within her borders, the Holy Father said, “That is a fair and responsible question because we cannot open the doors irrationally – but the basic question to ask is why there are so many migrants today.”

The Pope went on to say, “The problem started with the wars in the Middle East and Africa and with the underdevelopment of the African continent, causing hunger: if there is war, it is because there are arms manufacturers – which can be justified for defense – [but the problem is] especially [with] arms traffickers. If there is so much unemployment, it is because of the lack of investment that can provide work, such as Africa so desperately needs.

“This raises the broader issue of a global economic system fallen into an idolatry of money. Over 80% of the wealth of humanity is in the hands of about 16% of the population. A completely free market does not work. The market itself is a good thing but it takes a fulcrum, a third party, the state, to control and balance it: what we call the social market economy.

“Returning to migrants: the worst [kind of] reception is ghettoization. Migrants must rather be integrated. In Brussels, the terrorists were Belgians, the children of migrants, but they came from a ghetto. In London, the new mayor [a Muslim of Pakistani origin, Sadiq Khan] was sworn in in a cathedral and will probably be received by the Queen. This shows the importance for Europe to regain its ability to integrate. I think of Gregory the Great, who negotiated with the so-called barbarians, who are then integrated.

“This integration is even more necessary today, as Europe is experiencing a serious problem of low birth rate, due to a selfish search for well-being. A demographic vacuum develops. In France, however, thanks to family policy, this trend is mitigated.

The Pope’s interviewers then asked whether the fear of welcoming migrants is perhaps fed in part by a fear of Islam, and whether the Holy Father considers such fear justified.

In answer, Pope Francis said, “I do not think there is now a fear of Islam, as such, but of Daesh [the so-called ‘Islamic State’] and its war of conquest, driven in part by Islam. The idea of ​​conquest is inherent in the soul of Islam, it is true. But it could be interpreted with the same idea of ​​conquest, [found at] the end of the Gospel of Matthew, where Jesus sends his disciples in all nations.

“Faced with the current Islamic terrorism, we should question the way in which too Western a model of democracy was exported to countries where there was a strong power, such as in Iraq. Or in Libya, [with its] tribal structure. We cannot move forward without considering that culture. As one Libyan said some time ago: ‘We used to have Gaddafi, now we have 50 [of him]!’

“Deep down, coexistence between Christians and Muslims is possible. I come from a country in which they live together in good familiarity. Muslims venerate the Virgin Mary and St. George. In an African country, it was reported to me that for the Jubilee of mercy, Muslims stand in long queues at the Cathedral to go through the Holy Door and pray to the Virgin Mary. In the Central African Republic, before the war, Christians and Muslims lived together and must learn to do so again today. Lebanon also shows that it is possible.”