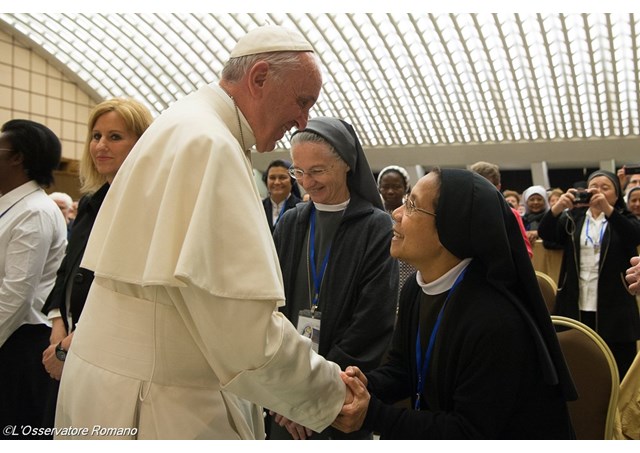 (Vatican Radio) The Director of the Holy See’s Press office, Father Federico Lombardi, said Pope Francis did not say in his remarks to the Heads of female religious orders and congregations that he intends to introduce the ordination of women and even less the ordination of women as priests. Father Lombardi’s statement followed the Pope’s widely-reported remarks that he wants to set up a Commission to study the question of female deacons. Pope Francis’ remarks on deaconesses came during a question and answer session on Thursday with some 900 heads of female religious orders and congregations who form part of the International Union of Superiors General.

During the hour and a half long conversation about the mission and ministry of women in religious life, the Pope responded to several delicate questions, including one where he was asked what prevents the Church from including women among the permanent deacons, just like during the early Church. In his reply, the Pope said understanding about the role of female deacons in the early Church remained unclear and agreed with the sisters that it would be useful to set up a Commission to study the question.

Father Lombardi described the encounter between the Pope and the female religious as a “beautiful conversation”  that was very “encouraging” about women and in particular about consecrated women in the life of the Church, including their role in important positions within the dicasteries where ordination is not implied.

Referring to the Pope’s much reported remark about setting up a Commission to study the question of female deacons, Father Lombardi said this was an issue that has been talked about within the Church in the past and arises from the fact that in the early Church there were women described as deaconesses who carried out certain tasks within the Christian community.

Father Lombardi said “we need to be honest” when looking at the Pope’s remarks about being willing to set up a Commission to look again at this issue with greater clarity.

“The Pope did not say he intends to introduce the ordination of female deacons and even less did he talk about the ordination of women as priests.” In actual fact, the Pope made clear in his preaching during the course of the Eucharistic celebration that he was not considering this (question) at all.”

Father Lombardi also said it was wrong to reduce all the many important things said by the Pope during his meeting with the religious sisters to this one question.