Pope: Prodigal son shows God's unconditional love for us all 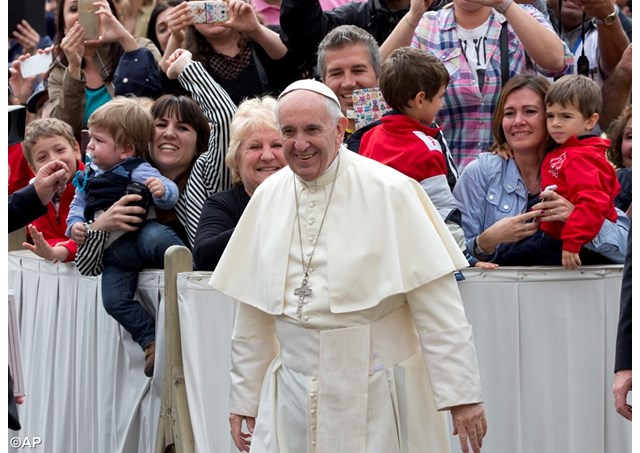 (Vatican Radio) At his Wednesday general audience Pope Francis focused on the parable of the prodigal son to show how God welcomes us all with an unconditional love. Even in the most difficult situations, he told pilgrims and visitors gathered in St Peter’s Square, God waits for us and longs to embrace us.

Pope Francis began his reflections at the moment the prodigal son returns home, asking forgiveness for what he has done and telling his father: “I no longer deserve to be called your son”. But on the contrary, he continued, the only thing that matters to the father is that his son has returned home safe and sound. Thus he runs out to embrace him, restores his dignity by giving him clothes, sandals and a ring on his finger, and calls for a feast to celebrate his return.

The Pope said the father’s tenderness and mercy overflows and, in the same way, we know that even in the most difficult moments of our lives, God waits for us and longs to embrace us as his children. Jesus’ words, he went on, can encourage parents who worry about their children becoming alienated and tempted by all kinds of dangers. They can help priests and catechists who wonder if their work is all in vain. They can even help those in prison, or those who’ve made mistakes and are unable to see any future for themselves.

The Pope went on to explain how this parable talks about both the prodigal son and his older brother, who also needs to learn to accept the father’s mercy. Though he has remained at home with his father, his words display no tenderness or thought for anyone but himself. How sad for the father, the Pope exclaimed, with one son who went away and the other who was never really close to him!

Both the younger son, who is expecting to be punished, and the older son, who expects a reward for his good behavior, are not acting according to God’s love, which transcends both reward and punishment, the Pope said.

The two brothers do not speak to each other, they live different lives, but neither of them lives according to the logic of Our Lord. Their logic is overturned by the words of the father, “let us celebrate with a feast, because this son of mine was dead, and has come to life again; he was lost, and has been found”. The greatest joy for the father, the Pope stressed, is to see his two sons reunited and recognizing each other as brothers.

Pope Francis noted that this parable ends without our knowing how the older brother responds to the father’s invitation to celebrate his brother’s return. Jesus is challenging each one of us, he said, to think about how we respond to God’s invitation, to open our hearts to his reconciling love and to become “merciful like the Father”.