Pope: A missionary’s life is consumed in the service of Christ. 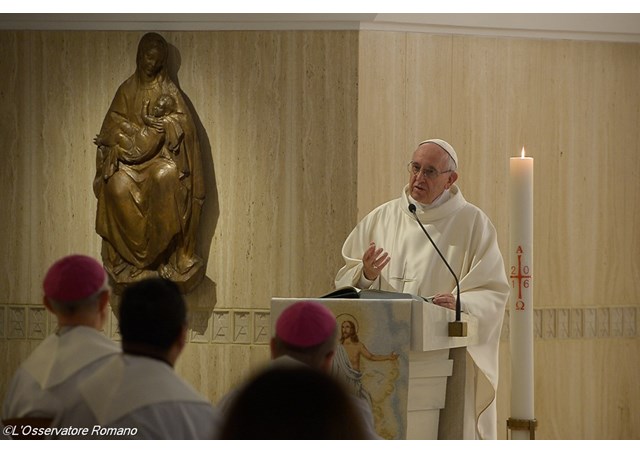 (Vatican Radio) Pope Francis said missionaries are docile to the call of the Holy Spirit which leads them to be consumed by a burning desire to dedicate their life to announcing the gospel, even in the most distant places. The characteristics of those men and women who choose to serve the Church by going on mission were the focus of the Pope’s homily at his morning Mass celebrated in the Santa Marta residence on Tuesday.

The cue for Pope Francis’ reflections during his homily was taken from the day’s reading where Paul takes his leave from the community at Miletus and talks of being compelled by the Holy Spirit to go next to Jerusalem. The Pope describes this call from the Spirit as an irresistible drive to donate one’s life to the service of Christ and even to consume it or burn it up on His behalf. He said this was the flame that burned in the heart of St Paul and every apostle and it’s the same flame that’s alive in the hearts of so many young people who have left their family and homeland to announce Jesus in far off lands.

“Compelled by the Spirit”

Referring to the day’s reading, Pope Francis said it was a touching episode where Paul knows that he will not see the community of Miletus again and tells his listeners that the Spirit was leading him to Jerusalem. He noted that Paul acknowledges the absolute mastery of the Spirit over his life who has always pushed him to announce the gospel despite the problems and difficulties. I believe, the Pope said, this excerpt evokes for us the life of missionaries throughout the ages.

“They went forward compelled by the Holy Spirit: a vocation!  And when we went to the cemeteries in those places, we see their tombs: so many of them died at an early age before they reached 40.  The reason is because they were not used to and couldn’t recover from the diseases present in those places. They gave up their young lives: they had consumed their lives.  I’m thinking of them in their last moment on earth, far from their homeland, their families and their loved ones, who said: ‘What I did was worth it!’”

Missionaries: glory of the Church

Pope Francis went on to describe how a missionary sets out without knowing what awaits him or her and mentions in this context the final farewell given by St Francis Xavier on his deathbed which evokes that of St. Paul. In his speech bidding farewell at Miletus, Paul said that “in one city after another the Holy Spirit has been warning me that imprisonment and hardships await me.”  The missionary, he continued, ‘knows that life will not be easy but he goes ahead,’ just like the apostles of our times.

“Our missionaries, these evangelisation heroes of our times…..   Europe who filled up other continents with missionaries…. And these people went there without ever returning home….  I think it is only right that we give thanks to the Lord for their testimony. It’s right that we rejoice for having these missionaries who are true witnesses.  I’m wondering what the final moment on earth was like for these people: how did they bid farewell?  Like Xaxier: ‘I left everything but it was worth it!’  They passed away, nameless. They were martyrs who offered up their lives for the Gospel. These missionaries are our glory! The glory of our Church!”

Young people who consumed their lives for a noble cause

Concluding his homily, Pope Francis said one key quality of a missionary is that “docility” towards the Spirit and said he prayed that instead of the dissatisfaction afflicting today’s young people the voice of the Spirit compels them to give over their lives for a noble cause.

“I would like to say to the young men and women of nowadays who don't feel at ease – (who say) ‘But I’m not that happy with this consumerist and narcissistic culture ….’   ‘But look at the horizon! Look who’s there, look at our missionaries!’ Pray to the Holy Spirit who compels them to go far away, to consume or burn up their lives. It’s a rather hard word but it’s worth it to really live our lives.  But we need to live it in a good way, to ‘consume’ it in service, in evangelizing and journeying forward. This is the joy of announcing the Gospel.”