Pope Francis' dream for a Europe with 'fresh air of honesty' 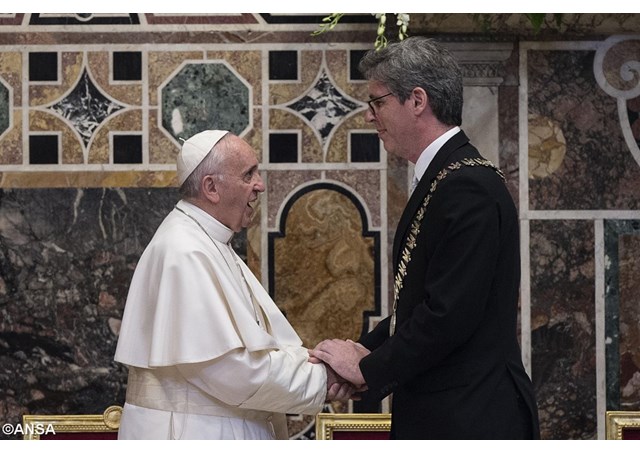 (Vatican Radio) Pope Francis received the International Charlemagne Prize at an awards ceremony in the Vatican on Friday.

The prestigious award is conferred each year on an individual or institution for their service in favor of European unification, and is awarded annually by the German city of Aachen to someone who has contributed to the ideals upon which the Prize was founded.

In remarks on the occasion, Pope Francis stressed that he would receive the award with an intention to offer it to Europe, adding, "Ours is not so much a celebration as a moment to express our shared hope for a new and courageous step forward for this beloved continent.”

In his Address, Pope Francis pleaded for a revitalized Europe, saying, “I am convinced that resignation and weariness do not belong to the soul of Europe, and that even our problems can become powerful forces for unity.”

He spoke of a Europe that can give birth to a new humanism based on three capacities: the capacity to integrate, the capacity for dialogue, and the capacity to generate. He noted that the roots of Europeans were consolidated down the centuries by a constant need to integrate a number of varied cultures. He added that a culture of dialogue “should be an integral part of the education imparted in our schools”, helping to give young people the necessary tools to settle conflicts in a new way.

The Pope stressed that all countries – the smallest and the greatest – have an active role to play in the creation of an integrated and reconciled society. Of special importance is the role of young people, who “are not the future of our peoples, they are the present.” He asked those in attendance, “How can we tell them that they are protagonists, when the levels of employment and underemployment of millions of young Europeans are continually rising?  How can we avoid losing our young people, who end up going elsewhere in search of their dreams and a sense of belonging, because here, in their own countries, we don’t know how to offer them opportunities and values?”

To create dignified and well-paying jobs, especially for young people, Pope Francis emphasised the need to move away from a “liquid economy”, one directed at revenue and profiting from speculation, to a “social economy”, one that invests in people by creating jobs.

Pope Francis concluded by describing his own dream for Europe: a place still capable of being a mother who has life because she respects and offers hope for life; a place attentive to the infirm and elderly; a place where people “breathe the pure air of honesty.”