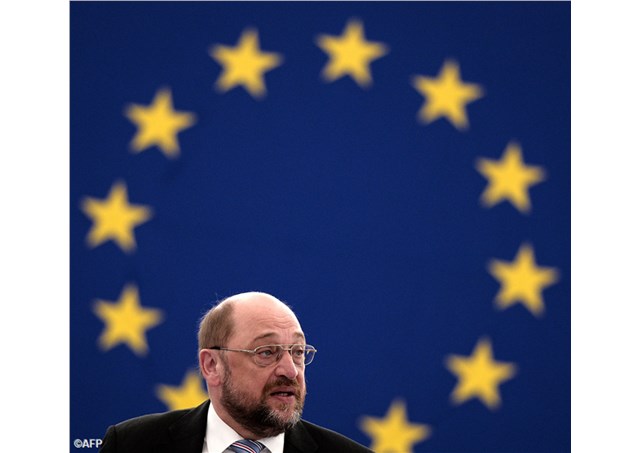 "Reminds us of our traditional values"

Schultz said as the son of Italian immigrants in Argentina, and then later as Archbishop of Buenos Aires, Pope Francis has known a very different world from the “very privileged one” that Europeans live in today and applauds him for reminding the people of Europe in his messages about the continent’s traditional values of solidarity, responsibility and respect for others. He said this makes him a great European and a worthy recipient of the 2016 Charlemagne Prize.

“Brexit is not rational”

Asked about the upcoming referendum being held in Britain in June on whether the nation should leave the European Union or not, Schultz said he hopes that the British voters will vote to stay in the EU.

“I hope that we can avoid a Brexit.” (Britain leaving the EU), saying he is convinced that the EU is stronger with Britain as a member just as Britain is stronger within the EU and therefore in his view “a Brexit is not rational.”

Pope Francis was selected last December to be the 2016 recipient of the prestigious award by the Charlemagne Prize’s executive committee in the German city of Aachen. Named after the first Holy Roman Emperor, the Charlemagne Prize is given to “public figures or bodies distinguished by their outstanding work towards European unity or cooperation between its states.”

The prize citation commended the Pope’s message of “peace and understanding” as well as “compassion, tolerance, solidarity and the integrity of creation throughout his pontificate.”

Previous winners of the Charlemagne Prize include St. Pope John Paul II who received a special edition of the award in 2004, the wartime British Prime Minister Winston Churchill, Czech dissident and Statesman Vaclav Havel and Brother Roger Schutz, founder of the ecumenical community of Taizé.

Listen to the interview with Martin Schultz, President of the European Parliament: