Pope Francis to Mercedarians: your charism is needed today 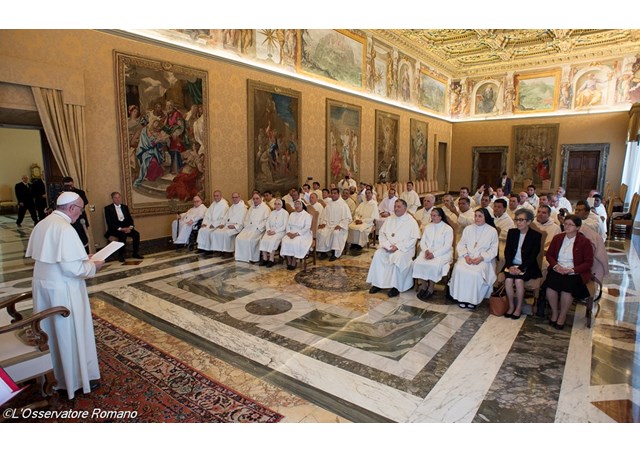 (Vatican Radio) Pope Francis on Monday received the participants in the General Chapter of the The Order of the Blessed Virgin Mary of Mercy – the Mercedarian Order – which was founded in 1218 by Saint Peter Nolasco, as an international community of priests and brothers, who live a life of prayer and communal fraternity based on the Rule of Saint Augustine, with the distinguishing characteristic of their charism being their willingness – expressed in a special vow – to lay down their lives for those in danger, especially those in danger of losing their faith.

Mercedarians have always understood the redemption of captives as a permanent service for the faith of those Christians who were most in danger of denying Jesus Christ and, as a result, in danger of losing their souls.

The Mercedarians are celebrating their General Chapter in view of the upcoming 800th Jubilee of their Order’s founding.

In remarks prepared for the occasion and delivered on Monday morning, Pope Francis celebrated the illustrious history of the Mercedarian Order, and called on participants to make a prayerful search for ways to adapt their history of heroic witness to the needs of the present.

“May this chapter may be a privileged occasion for a sincere and fruitful dialogue,” said Pope Francis, “[one] that will not remain in the glorious past, but examines the difficulties encountered on that path, hesitations and errors.” The Holy Father went on to say, “The real life of the Order must be sought in the ongoing effort to adapt and renew itself, in order to give a generous response to the real needs of the world and the Church, in a manner faithful to the perennial heritage of which [the Mercedarians of today] are depositaries.”

In the world today, the Mercedarians are present in 17 countries, where they continue to rescue people from modern types of captivity, especially those social, political, and psychological forms of captivity, which endanger their faith. They work in jails, marginal neighborhoods, among addicts, and in hospitals. In the United States, the Order of Mercy gives special emphasis to preserving the faith of families through education and parish work.

The Holy Father concluded with an exhortation, saying, “In the eighth centenary of the Order, do not cease ‘to proclaim the Year of Favor of the Lord’ to all those to whom you are sent: to those held prisoner and persecuted because of their faith; to victims of trafficking; to the young people in your schools; to all those who are served by your works of mercy and to all the faithful you serve in the parishes and missions with which you have been entrusted by the Church.”