Pope: There is always resistance in the Church to surprises of the Spirit 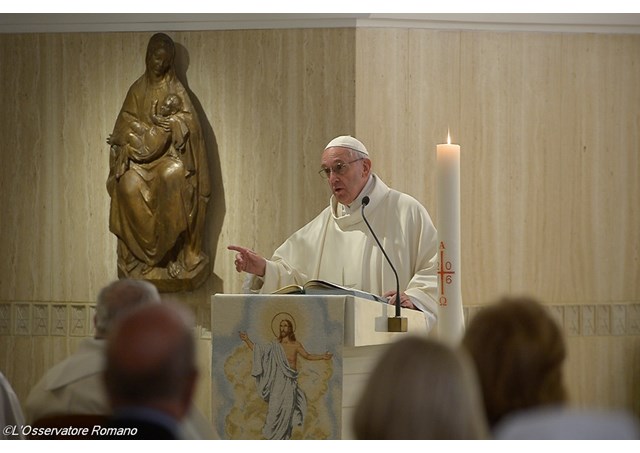 (Vatican Radio) There is always resistance to the surprises of the Spirit, but it’s the Spirit who continues to lead the Church forward. That was Pope Francis’ message at Mass on Thursday at the Santa Marta chapel as he reflected on the reading about division and resistance within the early Church in Jerusalem.

Commenting on today’s reading from Acts about the Council of Jerusalem, Pope Francis said the protagonist in the Church is always the Holy Spirit. It’s the Spirit who, from the very beginning, gives strength to the apostles to proclaim the Gospel and it’s the Spirit who carries the Church forward despite its problems.

Even when there is an outbreak of persecution, the Pope said, it’s the Spirit who gives believers the strength to stand firm in the faith, even if they face resistance and anger from the doctors of the law. In the passage from Acts, the Pope noted, there was a double resistance to the Spirit, from those who believed that Jesus came only for the chosen people and from those who wanted to impose the law of Moses, including the practice of circumcision, on those who had converted.

There was great confusion over all this, the Pope said, but the Spirit led their hearts in a new direction. The apostles were surprised by the Spirit, he said, as they found themselves in new and unthinkable situations. But how were they to manage these circumstances? Pope Francis said the passage begins by noting that ‘much debate had taken place’: no doubt heated debate, because on the one hand they were pushed on and on by the Spirit, but on the other, they were facing new situations that they had never seen or even imagined, such as pagans receiving the Holy Spirit.

The disciples were holding a ‘hot potato’ in their hands and didn’t know what to do, the Pope said. Thus they called a meeting in Jerusalem where each one could recount their experiences of how the Holy Spirit had been received by the Gentiles. And in the end they came to an agreement. But first , the Pope noted, “The whole assembly fell silent, and they listened while Paul and Barnabas described the signs and wonders God had worked among the Gentiles through them.” Never be afraid to listen with humility, the Pope said. When you are afraid to listen, you don’t have the Spirit in your heart. When the apostles had listened, they decided to send several of the disciples to the Greeks, the pagan communities, that had become Christians to reassure them.

Those who converted, the Pope continued, were not obliged to be circumcised. The decision was communicated to them in a letter in which the disciples say that “The Holy Spirit and we have decided….” This is the way of the Church when faced with novelties, the Pope said. Not the worldly novelties of fashion, but the novelties of the Spirit who always surprises us. How does the Church resolve these problems? Through meetings and discussions, listening and praying, before making a final decision. This is the way of the Church when the Spirit surprises us, Pope Francis said, recalling the resistance that emerged in recent times during the Second Vatican Council.

That resistance continues today in one way or another, he said, yet the Spirit moves ahead. And the way the Church expresses its communion is through synodality, by meeting, listening, debating, praying and deciding. The Spirit is always the protagonist and the Lord asks us not to be afraid when the Spirit calls us. Just as the Spirit stopped St Paul and set him on the right road, so the Spirit will give us the courage and the patience to win over adversity and stand firm in the face of martyrdom. Let us ask the Lord for grace, the Pope concluded, to understand how the Church can face the surprises of the Spirit, to be docile and to follow the path which Christ wants for us and for the whole Church.