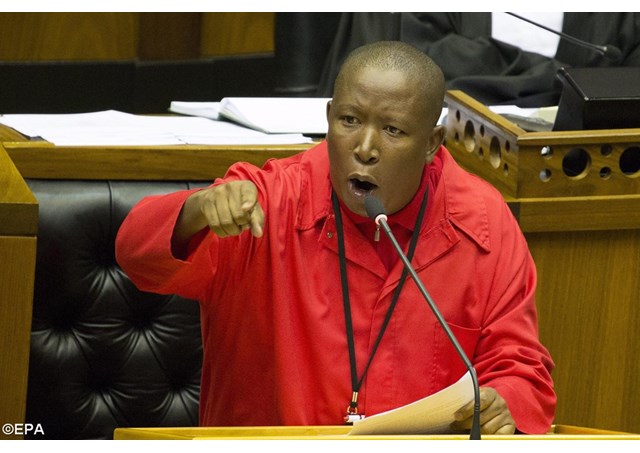 The Justice and Peace Commission of the Southern African Catholic Bishops’ Conference (SACBC) has called on all political parties to avoid making statements that could incite election violence and civil war.

Bishop Abel Gabuza‚ the Chairperson of the SACBC Justice and Peace Commission‚ issued the call on behalf of the Conference Monday. He was responding to the Economic Freedom Fighters (EFF) leader Julius Malema, who said during a televised interview that if the ANC continues to suppress violently peaceful protests‚ “We will run out of patience very soon, and we will remove this government through the barrel of a gun,”  Bishop Gabuza quoted Malema as saying.

“We are deeply saddened to hear of war rhetoric by the leader of the Economic Freedom Fighters‚” the chairperson of the SACBC Justice and Peace Commission reiterated.

“We have seen the evil consequences of civil war in other African countries‚ including massive loss of lives‚ a refugee crisis and irreparable damage to the economy. We do not want our nation to take such a path. We, therefore, appeal to all political parties to refrain from actions and rhetoric that could fuel election violence and civil war,” the Bishop said.

Bishop Gabuza said that the Church is also concerned about the rising incidence of violent protests as the country approaches the local government elections.

The Justice Commission believes that the use of excessive force, by the government, as a deterrent will not in itself solve the complex problem of violent protests‚ the Bishop said in a statement.

“If the government wants to stop violent protests‚ it should be serious in its efforts to tackle the root causes‚ including the rising economic inequalities‚ youth unemployment‚ a culture of patronage and the fierce scramble for political positions -especially when these positions are considered as an opportunity for self-enrichment,” the statement reads in part.

The SACBC Justice and Peace Commission has since asked all political parties to adhere to the Charter of Election ethics that they signed on 13 April.

The South African Government News Agency reported last week that more than ten political party leaders, in South Africa  signed the “Charter on Election Ethics,” to commit to playing their part in ensuring that free and fair local government elections take place in August. The charter outlines, among other things, values and ethics that political parties need to promote, support and adhere to during the elections. It requires them to strive to elect candidates who are ethical, principled and competent.