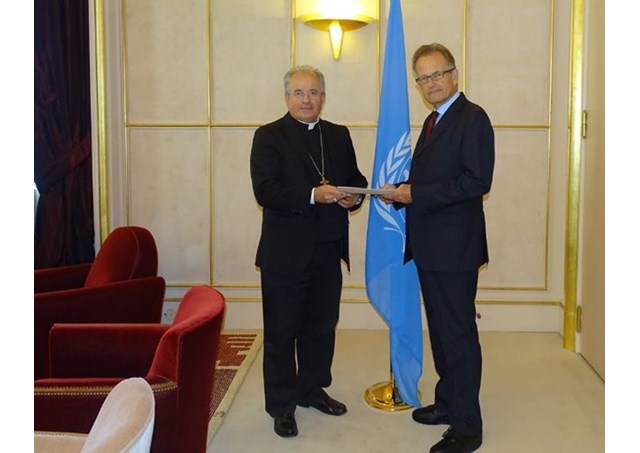 (Vatican Radio) Archbishop Ivan Jurkovič, a Vatican diplomat who previously served as Apostolic Nuncio to the Russian Federation, on Thursday presented his credentials as the new Permanent Observer of the Holy See to the Geneva-based U.N. agencies and the World Trade Organization.

Listen to the report by correspondent Christian Peschken:

The credentials were presented to the Director General of the UN-Geneva, Michael Møller.

The 63-year-old Slovenian was appointed to his new post by Pope Francis in February, just one day after the historic meeting between the Holy Father and Russian Orthodox Patriarch Kirill of Moscow in Cuba.

Archbishop Jurkovič was ordained as a priest of the Archdiocese of Ljubljana in 1977.  After graduating from the Faculty of Theology in Ljubljana in 1978, and studies at the Pontifical Ecclesiastical Academy from 1980 to 1984, he joined the diplomatic service of the Holy See in 1984.  He became a Doctor of Canon Law in 1988.  He served as Secretary of the Apostolic Nunciature to South Korea from 1984 to 1988; Counsellor of the Apostolic Nunciature to Colombia from 1988 to 1992; Counsellor of the Representation of the Holy See to the Russian Federation from 1992 to 1995; and Counsellor at the Secretariat of the State of the Holy See from 1996 to 2001.