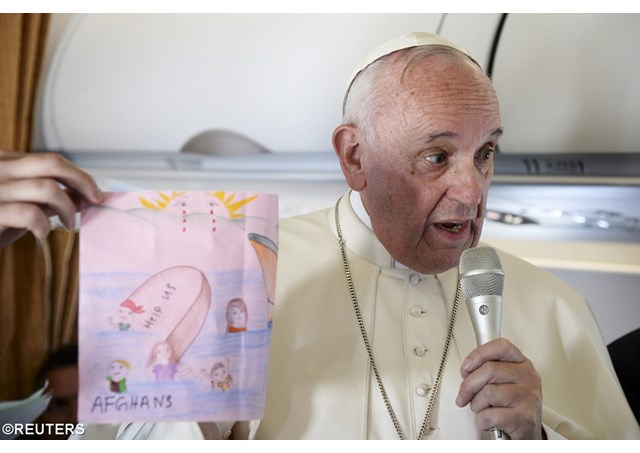 (Vatican Radio) Pope Francis gave a 30 minute press conference on the flight back from Lesbos to Rome on Saturday, sharing thoughts on a wide range of subjects including his opinion regarding the deal between the EU and Turkey, his meeting with Bernie Sanders, the closure of European borders and his recent apostolic exhortation.

The Pope began his traditional ‘conversation’ with journalists aboard the papal plane reflecting on the fact that the visit to Lesbos had had a very strong emotional impact on him.

Asked what he thinks about the recent deal between Brussels and Ankara, the Pope highlighted the fact that his visit to Lesbos was undertaken in a purely humanitarian spirit.

Regarding the fact that he has brought three refugee families back to Rome with him, he said the decision was the fruit of a ‘last-minute’ inspiration one of his collaborators had a week ago.

“Everything was arranged according to the rules. They have their documents. The Holy See, the Greek government and the Italian government have checked everything. They have been welcomed by the Vatican and with the collaboration of the Saint Egidio community they will be searching for work” he said.

Asked about a reported meeting on Saturday morning in the Vatican with the American presidential candidate Bernie Sanders, Pope Francis acknowledged it had taken place but specified that it had been a purely ‘polite’ encounter.

“This morning when I was leaving Senator Sanders was there. He had come to participate in the ‘Centesimus Annus’ Conference and greeted me politely together with his wife (…) It is called ‘manners’ and has nothing to do with politics” he said.

Another journalist asked why the three families of refugees chosen to be brought back to the Vatican are all Muslim. The Pope said the choice was not between Christians and Muslims and that those who were selected all had their papers in order.

One journalist asked the Pope whether he thinks that the closing of European borders marks the end of a European dream. Francis said that whilst he understands there are some governments and peoples who are afraid, he said he believes we have the responsibility of welcome.

“I have always said that building walls is not a solution. We saw walls during the last century and they did not resolve anything. We must build bridges. Bridges are built with intelligence, with dialogue, with integration” he said.

The Pope expressed his belief that Europe must urgently implement policies that welcome people, integrate them with work, create policies that foresee growth and a push forward a reform of the economy.

“All these things – he said – are bridges”, and he highlighted the suffering and pain witnessed during his visit to the camp in Lesbos.

The children there, he said, had given him drawings (which he showed those present) in which they asked for peace and expressed their pain and fear after having seen terrible things like other children drowning.

Asked whether Europe can open its arms to all the misery in the world the Pope reflected on the many faces of human suffering. He mentioned war and hunger, both of these - he said - an effect of the exploitation of the planet. He spoke of deforestation and of trafficking and of how fighting factions in Syria have been armed by others.

“I would invite the producers of arms to spend a day in the camp (in Lesbos): I believe that would be good” he said.

Turning to the Pope’s recently released Apostolic Exhortation on the family, one journalist asked for clarification saying there are discussions going on between those who maintain that nothing has changed when it comes to the question of access to the sacraments for the divorced and remarried whilst others argue that much has changed on this front.

In his reply, Pope Francis said a lot has changed but he urged the journalists to read the presentation made by Cardinal Schonborn, describing him as a great theologian who was also Secretary of the Congregation for the Doctrine of the Faith and whom, he said,  has a thorough knowledge of the faith.

“The answer to your question, he declared, is contained in that presentation”.

Pope Francis confessed that he was somewhat annoyed and saddened by the media’s fixation during and after the Synod  on the single issue of whether the divorced and remarried would be allowed to take communion.

He said the media didn’t realise that this was not the important question and they fail to notice that the family unit, the cornerstone of our society throughout the world, is in a state of crisis.

“They don’t realise, he went on, that young people don’t want to marry, that the falling birthrate in Europe should make us weep, that there is a lack of jobs, there are fathers and mothers taking on two jobs and children are growing up on their own without having their parents around”.