Vatican announces the schedule for Pope’s visit to Lesbos 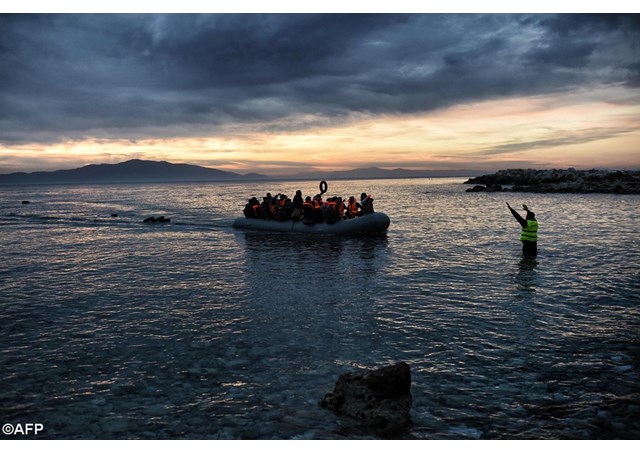 (Vatican Radio) Pope Francis will spend six hours on the Greek island of Lesbos on Saturday, April 16, where – together with Ecumenical Patriarch Bartholomew of Constantinople and the Greek Orthodox Archbishop of Athens and All Greece, Ieronymus II – he will spend time with refugees.

“Lesbos … is very close to the Turkish coast, just a few kilometers,” explained Vatican spokesman Fr. Federico Lombardi, SJ, at a press briefing on Thursday. “This is the reason so many migrants go to the island of Lesbos.”

Father Lombardi said the visit will have a humanitarian and ecumenical perspective.

“It does not directly touch on political positions, or other such things, but their focus is fundamentally humanitarian, experienced in an ecumenical key,” Father Lombardi said.

After arriving by plane on the island, Pope Francis will meet briefly with the Prime Minister of Greece, and then travel to the Mòria refugee camp, which is home to about 2,500 people.

The three religious leaders will have a special meeting with minors at the camp, as well as 250 selected asylum-seekers.

“The presence of minors, children, orphans - even those on their own - is very typical in these situations,” – Father Lombardi said – “Therefore, it is right to give them particular attention.”

While at the camp, a joint declaration will be signed, and Pope Francis and the other religious leaders will have lunch with some of the refugees.

Pope Francis will also have a meeting with the small local Catholic community. There are about 100 Catholics on Lesbos, and other Catholics in Greece will travel to the island to attend the encounter.

“Keep in mind that there is also a presence of the Catholic Church in Greece. Although very small in quantitative terms, it is still present,” Father Lombardi said.

At the end of the visit, the three religious leaders will hold a memorial for all the victims of the migration crisis, and observe a moment of silence for those who have died.

Returning to the airport, Pope Francis will meet privately with Ecumenical Patriarch Bartholomew and Archbishop Ieronymus and have a second private meeting with the prime minister before leaving for Rome.

07:00  Departure from Rome-Fiumicino International airport for Mytilene (capital of Lesbos)

10:20 Arrival at the international airport of Mytilene

The Holy Father is received by the Prime Minister; and is then welcomed by His Holiness Bartholomew, Ecumenical Patriarch of Constantinople, His Beatitude Ieronymos, Archbishop of Athens and All Greece, and after this, by  Bishop Franghískos Papamanólis, O.F.M. Cap., Chairman of the Greek Episcopal Conference.

10:35  PRIVATE MEETING WITH PRIME MINISTER (at the airport)

10:55  Transfer by minibus with His Holiness Bartholomew and his Beatitude Ieronymos to Mòria refugee camp(16 Km).

Along the barricades will be gathered about 150 minors who are guests of the center. The religious leaders will go across the courtyard dedicated to the registration of refugees and will arrive at the big tent to individually greet about 250 asylum seekers.

12.25:  Speech by Archbishop Ieronymos; by Patriarch Bartholemew;  and by Pope Francis at the podium of the courtyard for refugee registration.

12.45:  Lunch with the three religious leaders with the some of the refugees in the space behind the podium.

13.45  arrival at the headquarters of the Coast Guard.

MEETING WITH CITIZENS AND THE CATHOLIC COMMUNITY.

MEMORIAL FOR THE VICTIMS OF MIGRATION.

SPEECH BY THE HOLY FATHER

At the end, the three religious leaders will each recite a brief prayer for the victims of migration.

After a minute of silence is called for, the three leaders will receive from three children laurel wreaths, which will be thrown into the sea.

PRIVATE MEETING WITH THE ARCHBISHOP OF ATHENS AND ALL GREECE

PRIVATE MEETING WITH THE ECUMENICAL PATRIARCH

PRIVATE MEETING WITH THE PRIME MINISTER

15:15  Departure by plane from the international airport of Mytilene for Rome.