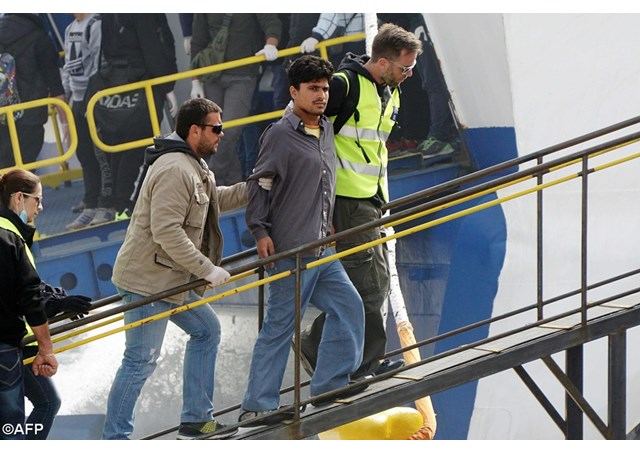 (Vatican Radio) As Pope Francis prepares to visit the Greek island of Lesbos, one of the gateways of Europe for hundreds of thousands of people fleeing conflict, we take a look at the current conditions forced migrants and refugees are faced with as they attempt to reach their final destinations.

The situation in Lesbos is highly charged as a recent deal between the EU and Ankara directly affects the refugees and migrants on the island.

According to that deal, migrants arriving in Greece are to be sent back to Turkey if they do not apply for asylum or their claim is rejected.

The deal also says that for every Syrian migrant sent back to Turkey, one Syrian already in Turkey will be resettled in the EU.

Apart from the dramatic situation in the main refugee center on the island – the Morìa camp which Pope Francis will visit – rights organizations are raising doubts as to whether Turkey really can offer the protection that many of these migrants need and whether the European Union is living up to its own core values on human rights.

Mark Provera says first hand JRS experience shows that there are many migrants in a very vulnerable position.

“The recent agreement between Brussels and Ankara is an extremely unjust one. This is not about protection, it’s about deterrence” he says.

Provera explains that the deal consists of two core elements: “forced migrants, seeking protection, fleeing violence in their own countries, are quickly assessed when they reach the Greek island, with the view of having them return to Turkey; the second aspect is that for every Syrian returned to Turkey from Greece, another – completely different Syrian – will be admitted to an EU member state. This has been called the one-for-one deal”.

He points out  that instead of putting a stop to the illegal crossings which play into the hands of human smugglers, the one-for-one scheme effectively foresees one Syrian risking his life and making the dangerous crossing from Turkey to Greece in order for another person to be resettled in the EU.

“The claims that this scheme saves lives ring hollow, given that it’s based on forced migrants actually engaging in the very risk  that this deal purports to avoid” he says.

Voicing the concern of JRS that the EU has misappropriated the need to create safe and regular channels for refugees to reach safety in Europe, Provera also points out that every person has the right to apply for asylum and have their application individually assessed regardless of race, religion or nationality.

He agrees that many aspects of this deal appear to be in overt violation of international humanitarian law.

He also says it is a dangerous turning point in the way States deal with people seeking protection because it is contrary to the principle of non-refoulement of refugees (or not pushing back people in need of protection).

“If we keep going down this route how do we expect to justly regulate our relations with one another” he says.

The fact, Provera says, that so many people are continuing in these days to arrive in Greece notwithstanding the implementation of the EU/Turkey deal talks volumes about their desperation and their need for protection.

Regarding the Morìa Center in Lesbos where people are being registered and assessed, Provera says that “formally ‘open’ Centers which had been called ‘hotspots’ in European policy language have now been transformed into detention Centers”.

This, he says, is particularly troubling as such decisions can only represent a last resort.

He points out is also unacceptable because of the profile of forced migrants who are reaching the Greek island: “statistics show a large number of adults with their families, a large proportion of women and children.”

So, he says, these are entirely inappropriate reception conditions for people to be held in.

Provera says European governments need to rethink not only the legality of this deal, they need to commit to honouring their international and their moral obligations to protect some of the most vulnerable people in the world.

“We would like to see firstly that all asylum seekers arriving on EU territory have full and proper access to the asylum procedure and that their claims are assessed properly in accordance with international and European law” he says.

The second thing, Provera continues, is that JRS continues to advocate for more safe and legal ways for people to reach European territory in order to make their claim for asylum.

He says there are many existing legal procedures and instruments such as those that relate to family reunification, humanitarian admission, humanitarian visas and legal visas for asylum seekers and even private sponsorship that could and should be implemented.

Provera says JRS hopes to see European governments take a comprehensive approach and make good use of existing instruments to use the full range of possibilities geared towards helping people who seek protection in the European Union.

Welcoming Pope Francis’ visit to Lesbos Provera says it goes an enormous way in highlighting the plight of individual people who are victims of violence, injustice and disaster:

“By bartering people as mere numbers we forget there are individual people involved in very perilous and vulnerable situations; we forget why people are needing protection and why they are leaving their countries in order to seek protection in Europe” he says.

So, he concludes, JRS hopes very much the Pope’s visit will highlight the personal circumstances and the human factor behind the numbers.