Pope Francis warns against those who 'judge' with closed hearts 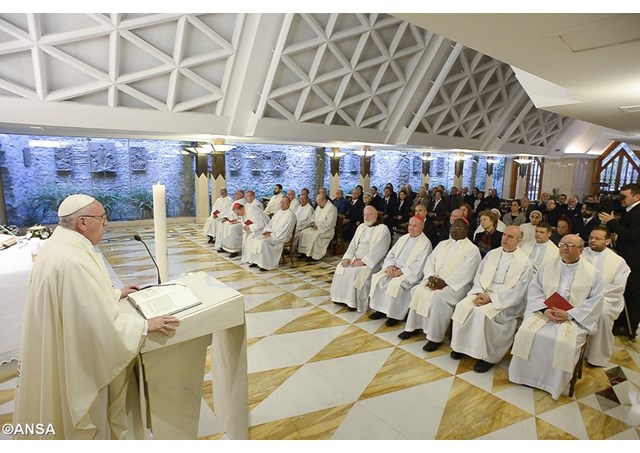 (Vatican Radio) Pope Francis on Monday spoke of the importance of taking stock of what is in people’s hearts and lives instead of only taking the law into account.

During his homily at morning Mass at the Casa Santa Marta, the Pope spoke of the Doctors of the Law whom – he said - passed judgment with their hearts closed to God and to prophecy; all that mattered to them – he explained – was to uphold the Law.

Pope Francis was reflecting on the Reading from the Acts of the Apostles in which the Doctors of the Law accuse Stephen of speaking “blasphemous words against Moses and God” because they “could not withstand the wisdom and the Spirit with which he spoke.”

They even instigated false witnesses to uphold their claims, he said.

“Their hearts, closed to God’s truth, clutch only at the truth of the Law, taking it by ‘the letter’, and do not find outlets other than in lies, false witness and death” he said.

The Pope pointed out that Jesus had already reprimanded them for this attitude, because "their fathers had killed the prophets", and they were now building monuments to those prophets.

He said that the response of the "doctors of the letter" is more cynical than hypocritical when they say that had they been in the days of their fathers, they would not have done the same.

Thus - the Pope said – they wash their hands of everything and judge themselves pure.

Pope Francis said: "It hurts when I read that small passage from the Gospel of Matthew, when Judas, who has repented, goes to the priests and says: ‘I have sinned' and wants to give ... and gives them the coins. ‘Who cares! - they say to him: it’s none of our business!’ They closed their hearts before this poor, repentant man, who did not know what to do. And he went and hanged himself. And what did they do when Judas hanged himself? They spoke amongst themselves and said: 'Is he a poor man? No! These coins are the price of blood, they must not enter the temple... and they referred to this rule and to that… The doctors of the letter. "

The life of a person did not matter to them, the Pope observed, they did not care about Judas’ repentance.

The Gospel, he continued, says that Judas came back repentant. But all that mattered to them “were the laws, so many words and things they had built”.

Stephen - the Pope continued – ends up like all prophets, like Jesus. And this is repeated in the history of the Church:

Pope Francis pointed out that Jesus himself ended up on the cross for having trusted in God and obeyed His Word and he reminded the faithful of  Jesus’ words of tenderness when he said to the disciples on the Road to  Emmaus:  “Oh, how foolish you are! How slow of heart to believe all that the prophets spoke.”

He concluded saying: “Let us ask the Lord to look to the large and to the small follies of our hearts with the same tenderness, to caress us gently and to say to us: ‘Oh you foolish and slow of heart’ and begin to explain things to us.”