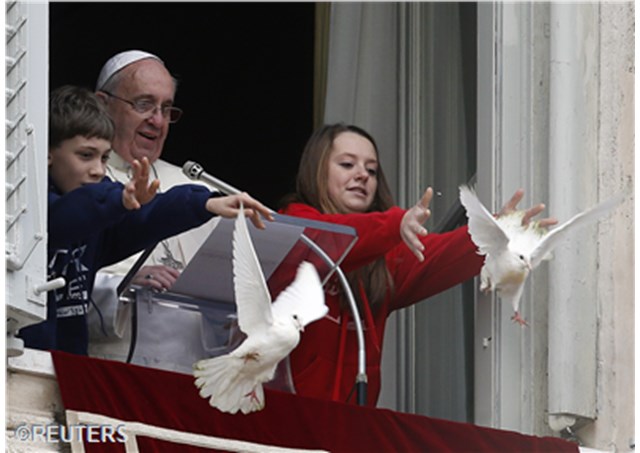 (Vatican Radio) Pope Francis has sent a Message to the participants in a major conference sponsored by Pax Christi International, the Catholic Peacebuilding Network, and the Pontifical Council for Justice and Peace, exploring the theme: Nonviolence and Just Peace: Contributing to the Catholic Understanding of and Commitment to Nonviolence.

Addressed to the President of the Pontical Council for Justice and Peace, Cardinal Peter Turkson, the Message renews the Holy Father's call for an end to the use of the death penalty, and calls on all people of good will to recognize what Christians profess as a consequence of faith: that it is only by considering our peers as brothers and sisters that humanity can overcome wars and conflicts.

Below, please find the full text of the Holy Father's Message, in English

I am delighted to convey my most cordial greetings to you and to all the participants in the Conference on Nonviolence and Just Peace: Contributing to the Catholic Understanding of and Commitment to Nonviolence, which will take place in Rome from the 11th to 13th of April 2016.

This encounter, jointly organized by the Pontifical Council for Justice and Peace and Pax Christi International, takes on a very special character and value during the Jubilee Year of Mercy. In effect, mercy is “a source of joy, serenity and peace”,[1] a peace which is essentially interior and flows from reconciliation with the Lord.[2] Nevertheless, the participants’ reflections must also take into account the current circumstances in the world at large and the historical moment in which the Conference is taking place, and of course these factors also heighten expectations for the Conference.

In order to seek solutions to the unique and terrible ‘world war in instalments’ which, directly or indirectly, a large part of humankind is presently undergoing, it helps us to think back in time. Let us rediscover the reasons that led the sons and daughters of a still largely Christian civilization in the last century to create the Pax Christi Movement and the Pontifical Council for Justice and Peace. From their example we learn that to bring about true peace, it is necessary to bring people together concretely so as to reconcile peoples and groups with opposing ideological positions. It is also necessary to work together for what persons, families, peoples and nations feel is their right, namely, to participate on a social, political and economic level in the goods of the modern world.[3] Further, the “unceasing effort on the part of that higher creative imagination which we call diplomacy”[4] must be continuously nourished; and justice in a globalized world, which is “order in freedom and conscious duty”,[5] must constantly be promoted. In a word, humanity needs to refurbish all the best available tools to help the men and women of today to fulfil their aspirations for justice and peace.

Accordingly, your thoughts on revitalising the tools of non-violence, and of active non-violence in particular, will be a needed and positive contribution. This is what as participants in the Rome Conference you propose to do. In this message I would like to remind you of some further points which are especially of concern to me.

The basic premise is that the ultimate and most deeply worthy goal of human beings and of the human community is the abolition of war.[6] In this vein, we recall that the only explicit condemnation issued by the Second Vatican Council was against war,[7] although the Council recognized that, since war has not been eradicated from the human condition, “governments cannot be denied the right to legitimate defence once every means of peaceful settlement has been exhausted.”[8]

Another cornerstone is to recognize that “conflict cannot be ignored or concealed. It has to be faced.”[9] Of course, the purpose is not to remain trapped within a framework of conflict, thus losing our overall perspective and our sense of the profound unity of reality.[10] Rather, we must accept and tackle conflict so as to resolve it and transform it into a link in that new process which “peacemakers” initiate.[11]

As Christians, we also know that it is only by considering our peers as brothers and sisters that we will overcome wars and conflicts. The Church tirelessly repeats that this is true not merely at an individual level but also at the level of peoples and nations, for it truly regards the International Community as the “Family of Nations”. That is why, in this year’s Message for the World Day of Peace, I made an appeal to States’ leaders to renew “their relations with other peoples and to enable their real participation and inclusion in the life of the international community, in order to ensure fraternity within the family of nations as well.”[12]

Furthermore, we know as Christians that, in order to make this happen, the greatest obstacle to be removed is the wall of indifference. Recent history justifies using the word ‘wall’ not in a figurative sense alone, for unhappily it is an all too tangible reality. This phenomenon of indifference touches not only our fellow human beings but also the natural environment, with often disastrous consequences in terms of security and social peace.[13]

Nevertheless, we can succeed in overcoming indifference – but only if, in imitation of the Father, we are able to show mercy. Such mercy is so to speak ‘political’ because it is expressed in solidarity, which is the moral and social attitude that responds best to the awareness of the scourges of our time and of the inter-dependence of life at its different levels – the connections between an individual life, the family, and the local and global community.[14]

In our complex and violent world, it is truly a formidable undertaking to work for peace by living the practice of non-violence! Equally daunting is the aim of achieving full disarmament “by reaching people’s very souls”,[15] building bridges, fighting fear and pursuing open and sincere dialogue. The practice of dialogue is in fact difficult. We must be prepared for give and take. We must not assume that the others are wrong. Instead, accepting our differences and remaining true to our positions, we must seek the good of all; and, after having finally found agreement, we must firmly maintain it.[16]

We can joyfully anticipate an abundance of cultural differences and varied life experiences among the participants in the Rome Conference, and these will only enhance the exchanges and contribute to the renewal of the active witness of non-violence as a “weapon” to achieve peace.

Finally, I would like to invite all those present to support two requests I addressed to governmental authorities in this Jubilee Year: to abolish the death penalty where it is still in force, and to consider the possibility of an amnesty; and to forgive or manage in a sustainable way the international debt of the poorer nations.[17]

I warmly wish Your Eminence and all the participants fruitful and successful labours, and I extend to you all my Apostolic Blessing.