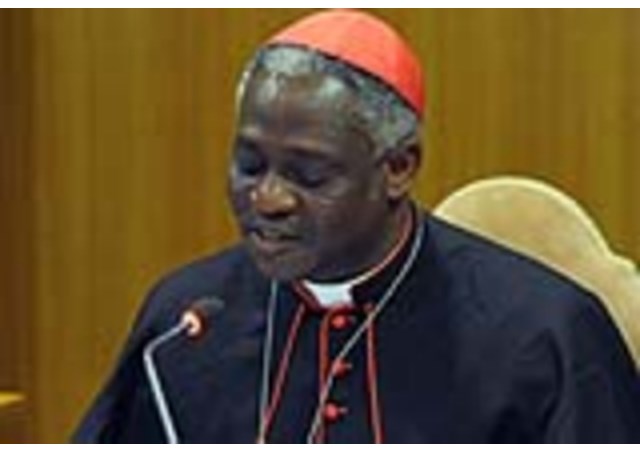 (Vatican Radio) The President of the Pontifical Council for Justice and Peace, Cardinal Peter Turkson, welcomed participants on Monday in a major conference jointly sponsored and organized by the Dicastery he heads, along with Pax Christi International and the Catholic Peacebuilding Network. Cardinal Turkson began by reading the Holy Father's Message to participants in its entirety, before offering a reflection on the true meaning of peace.

Below, please find the text of Cardinal Turkson's reflections in English

The Christian position does not accept the reduction of social relationships to choices between being the master or the slave. Instead, it calls for a spiritual conversion so that relationships of unjust domination may give way to practices of fraternal love and solidarity. Such is the value of peace as taught by Christ; and this is the option that Pax Christi and CPN embrace.

Let me raise two points that contribute to a Christian assessment of situations of violence.

First, consider the distinction between tension and violence. St John Paul II: “Violence is evil, … violence is unacceptable as a solution to problems, … violence is unworthy of man.”[18] The men and women of our age are inclined to cry out against injustice when they think that their aspirations are being frustrated; so they think it is their duty to support every sort of social upheaval that they deem justified because it aims at ending their frustration. This betrays ignorance of the mechanisms by which social structures evolve.

Pope Francis gave a very detailed analysis of this phenomenon in his a braccio speech to the World Youth Forum on 13 August 2015. Tension, he said, is inevitable; differences between individuals and groups are not always an evil. Moreover, he added, a society without tension would be rather sad; tensions are part of life, and some of them can present opportunities for struggle over ways to create greater fraternity among people and to constantly intensify this search.

Second, we ought to think about what is needed to “establish peace” – a reflection in Gaudium et Spes (§78) that led to the establishment of the Pontifical Council (cf § 90).

Pope Francis speaks in simple terms about peace-making. These terms, found in three paragraphs of Evangelii Gaudium, convey the philosophical foundations for building peace, from local harmony to a fraternal international community.

The Holy Father begins with a focus on the dignity of the human person and the common good:

Peace in society cannot be understood as pacification or the mere absence of violence resulting from the domination of one part of society over others. Nor does true peace act as a pretext for justifying a social structure which silences or appeases the poor, so that the more affluent can placidly support their lifestyle while others have to make do as they can. Demands involving the distribution of wealth, concern for the poor and human rights cannot be suppressed under the guise of creating a consensus on paper or a transient peace for a contented minority. The dignity of the human person and the common good rank higher than the comfort of those who refuse to renounce their privileges. When these values are threatened, a prophetic voice must be raised. (§218)

So the foundation of peace is justice. In this Pope Francis echoes St John XXIII, whose Pacem in Terris sought peace not in the absence of war but in human hearts. As Blessed Paul VI asserted, peace is not “simply the absence of warfare, based on a precarious balance of power; it is fashioned by efforts directed day after day towards the establishment of the ordered universe willed by God, with a more perfect justice among men”.[19] So “In the end,” says Pope Francis, “a peace which is not the result of integral development will be doomed; it will always spawn new conflicts and various forms of violence.” (§220)

Pope Francis sums up the positive action he would expect from every man and every woman this way:

People in every nation enhance the social dimension of their lives by acting as committed and responsible citizens, not as a mob swayed by the powers that be. Let us not forget that “responsible citizenship is a virtue, and participation in political life is a moral obligation”[20]. Yet becoming a people demands something more. It is an ongoing process in which every new generation must take part: a slow and arduous effort calling for a desire for integration and a willingness to achieve this through the growth of a peaceful and multifaceted culture of encounter. (§221)

So much remains to be done. What goals might Pax Christi and CPN work for? What contribution can be made, from the Christian point of view, to consolidating peace by pursuing the objectives of freedom, equality and solidarity within and between nations?

The tensions of our day grow clearly out of the fact that viewpoints are often different, and even opposed, on how to resolve the tensions and conflicts that divide the international community. It would be dangerous to identify the Gospel message with this or that political program – from this, nationalisms are born, which believe their vocation is to impose their mark on other peoples. The same thing happened with supposedly ‘progressive’ movements of the past that claimed to find human salvation in an ideology – and then persisted in applying that ideology in spite of the accompanying violations of human rights.

To remain true to itself, the Christian contribution to peace must take a different path. On this path, the steps are practical measures chosen in light of higher duties. The involvement of a Christian in the promotion of peace presupposes a constant dialogue of everyone between the needs and threats of which each is aware, and the possibility of a fraternal communion established by Christ when he refused the legions of angels that his Father could have provided in order to save him.

This has implications for our reflections on just war theory. The media, and public opinion influenced by the media, convey an incorrect interpretation of the religious concept of just war. It origins are in St. Augustine, and St. Thomas formulated it clearly; but its fuller treatment arose when Europe was governed by barbarian peoples for whom the only thing that counted was violence. At the same time, however, these peoples regarded the Church as a civilizing Power because of its religious nature. Therefore, what the Church attempted to do was to enlarge the scope of peace by continually reducing the conditions under which a Prince could justify his recourse to the use of force. The Prince, of course, wished to avoid being considered sinful and risking the canonical penalties of the Church. The law of God, which the Church interpreted, was recognized as being normative; it achieved a progressive transformation of consciences, and in fact, the recourse to violence was no longer seen as the only possible way to resolve conflicts. But a shift occurred with the secularization of Western societies, and each Prince claimed the right to decide whether or not his recourse to war was just.

How do we apply the distinction nowadays between just and unjust war? As you would expect, the guidance of Pope Francis is nuanced. This is what he said with reference to ISIS:

I trust you find renewed vigour in the link that Pope Francis makes between the reduction of violence and the increase in justice, compassion and dialogue. Please receive this introduction as a basket of gifts, a big basket of generous gifts, beginning with the Message of Pope Francis and surrounded by the Gospel as lived and reflected and passed on in the Church. So it is a powerful, inspiring and utterly vital ecclesial tradition that you stand in and carry forward. May our sharing and deliberations in this Year of Mercy, as Pax Christi, Catholic Peacebuilding Network and Pontifical Council for Justice and Peace, shed the bright light of Gospel peacemaking on our Church and our world in the 21st century.