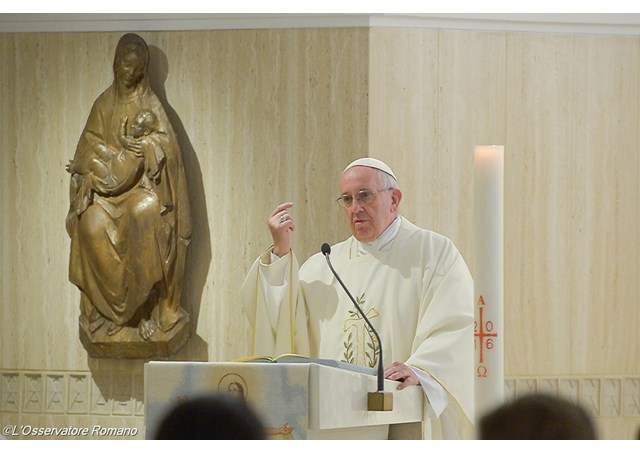 (Vatican Radio) At his daily Mass on Thursday, Pope Francis said it is “the saints of ordinary life, and the martyrs of today that carry the Church forward.” They do so, he said, “with their consistent and courageous witness to the Risen Christ, thanks to the working of the Holy Spirit.”

The first Reading taken from the Acts of Acts of the Apostles, speaks of the courage of Peter, who, after the healing of the crippled man, preached the Gospel before the leaders of the Sanhedrin. Enraged at his boldness, they wanted to put Peter to death. They had already forbidden the Apostles to preach in the Name of Jesus, but Peter continued to proclaim the Gospel – because, as he said, “We must obey God rather than men.” This “courageous” Peter, the Pope said, has nothing in common with “Peter the coward” who denied Christ three times on the night of Holy Thursday. Now Peter is strong in his testimony. Christian witness, Pope Francis continued, follows the path of Jesus, even to the point of giving one’s life. In one way or another, he said, the Christian “puts his life on the line” by giving true witness:

The martyrs of today

Without the Holy Spirit, Pope Francis continued, “we cannot be witnesses.” The true witness is the person who is consistent “in what he says, what he does, and what he has received,” namely the Holy Spirit. “This is Christian courage, this is the witness”:

“It is the witness of our martyrs of today – so many! – chased out of their homeland, driven away, having their throats cut, persecuted: they have the courage to confess Jesus even to the point of death. It is the witness of those Christians who live their life seriously, and who say: ‘I can’t do this; I cannot do evil to another; I cannot cheat; I cannot lead life halfway, I have to give my witness.’ And the witness consists in saying what has been seen and heard in faith, namely, the Risen Jesus, with the Holy Spirit that has been received as a gift.”

In difficult moments in history, Pope Francis said, we hear it said that “our country needs heroes – and this is true, this is right.” But, he asked, “what does the Church need today? It needs witnesses, martyrs”: