Catholics and Methodists: Walking together in service to the world 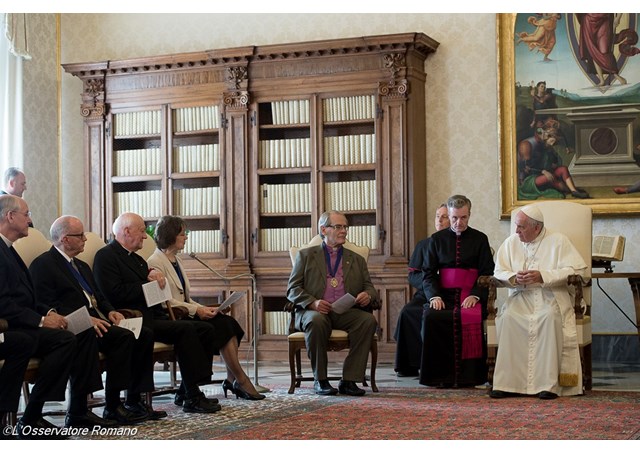 (Vatican Radio) Pope Francis said on Thursday that Catholics and Methodists have much to learn from one another as they work together in loving service to the world. His words came in an audience with leaders of the World Methodist Council, the Methodist Council of Europe and the Methodist Church in Britain who here for the opening of a new ecumenical centre in Rome.

“If we cannot as yet think alike in all things, at least we may love alike”. Those words were written by John Wesley, one of the founders of the Methodist movement, in his ‘Letter to a Roman Catholic’ in the mid-18th century. Wesley also stressed that Catholics and Methodists are called “to help each other in whatever…leads to the Kingdom”.

In his meeting with the global Methodist leadership, Pope Francis said it’s true we do not as yet think alike in all things, noting that especially on issues of ordained ministry and ethics, much work remains to be done. But, he stressed, none of these differences constitutes such an obstacle as to prevent us from loving in the same way and offering a common witness to the world.

Half a century since the joint Catholic-Methodist dialogue commission began its work, its members are preparing to publish a new document on ‘The Call to Holiness’, an area where the Pope said members of the two Churches have much to learn from one another. We must both do what we can, he said, to ensure that members of our respective congregations meet together and encourage each other. Even where differences remain, he added, these can and must become the impetus for further reflection and dialogue.

Welcoming the opening of the new Methodist Ecumenical Office in Rome, the Pope said it’s a sign of growing closeness and of our shared desire to overcome all that stands in the way of our full communion.

Rev. Robert Gribben is a minister of the Uniting Church of Australia and chair of the World Methodist Council’s committee on ecumenical relationships. At this important moment in the life of the global community, he shared some thoughts on the importance of working for Christian unity and the significance – for Methodists – of this Jubilee year of mercy.

Gribben says he believes the theologians have done "a wonderful job in clearing the way for us to walk together...."

One of the obstacles, he says, is peoples' inability to move - or "mabye their inability to believe that such good things have actually happened..."

Getting the local church structures to change is an enormous challenge, he notes, especially in a world where Christian faith is under attack we tend to be defensive and hang onto what we know...

Gribben says that the word 'mercy' features prominently in the hymns of Charles Wesley....apart from the word 'love', he says, "there could hardly be a more important word in all Christian doctrine and practice".