Cardinal Parolin speaks on migrants in visit to Macedonia 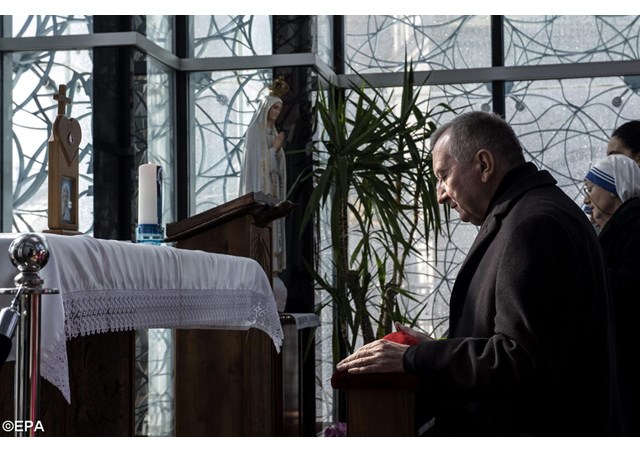 (Vatican Radio) The Vatican Secretary of State, Cardinal Pietro Parolin, stressed the importance of "humane" treatment of migrants during a meeting with Emil Dimitriev, the Prime Minister of the former Yugoslav Republic of Macedonia on Friday in Skopje.

"The solution [to the migration crisis] should involve solidarity and humane treatment," Cardinal Parolin said. "Refugees should be seen as children, women, adults in a very difficult situation, in need of assistance."

The chief Vatican diplomat is in the former Yugoslav Republic of Macedonia  for a two-day official visit.

Cardinal Parolin spoke about the strong ties between the Vatican and Skopje, adding they could be "enhanced in some points."

"We share mutual values of promoting peace, coexistence, respect for diversity, and all the things which imporove life in a society," Parolin said.

The talks between the two focused on culture, health, science, education, and their further development.

Prime Minister Dimitriev said they spoke about "the cooperation of the Catholic Church in Macedonia and its constructive role in the people's coexistence."

President Ivanov said the decision to canonize the Skopje-born Mother Teresa"is of great cultural and historical significance for Macedonia," adding the country would be hosting several events to commemorate her canonization.

The President also praised the cooperation between the State Archive of the former Yugoslav Republic of Macedonia  and the Vatican Secret Archives, which has allowed scholars to learn more about the history of the region.

Speaking about the refugee crisis at his press conference with Cardinal Parolin, President Ivanov said it was "not just a matter of EU, but of all Europeans living on this continent."

"Every analysis shows there will be improvement. Turkey is expected to fulfill all its obligations, and we should see that on our borders" – the President explained – "If the intensity of the migrant influx decreases, it will be along the whole route. This means that we would be the gate of that corridor leading to Europe. Greece will have to build many registering spots, the so-called 'hotspots', as well as refugee camps to provide them with all they need when they reach a Schengen-state, such as asylum rights [and] humane treatment."